Fullerenes are a family of carbon compounds having at least 60 carbon atoms forming carbon spheres, where carbon atoms are arranged in semi-regular polyhedra distributed over the sphere.

The fullerene family was discovered in 1985 by Smalley, Curl and Kroto (Nobel prize for chemistry 1996), and are very abundant at the Earth's surface and in the universe. They are the third allotropic form of carbon after diamond and graphite. Fullerenes have the property of forming closed cages (with the C60 molecule) with a structure similar to that of a football.

The C60 molecule has 60 carbon atoms arranged at the summits of a 0.7 nm diameter regular polyhedron with hexagonal and pentagonal faces.

At the end of the 1970s, Peter Wiles and John Abrahamson described sheets of carbon rolled up together. These structures were produced at the same time as fibres in an electric arc generated between two graphite electrodes.

Although the truncated icosahedron has been known since antiquity as one of the Archimedean solids and was described in the Renaissance by Piero della Francesca, a cage entirely made of carbon atoms arranged in hexagons and pentagons was only created by David Jones in 1966.

The first mention of the C60 molecule as a stable molecule was made by E. Osawa and Yoshida who, in 1970 and 1971, attempted a theoretical description of this novel and hypothetical structure. It was a few years later that the HOMO and LUMO (highest occupied molecular orbital and lowest unoccupied molecular orbital) energy levels of C60 were calculated for the first time using the Hückel method, by the Russian physicists Bochvar and Gal'pern in 1973.

It was not until 1985 that the theoretical concept of the C60 molecule took shape as physical reality, and it was Harry Kroto at Sussex University(England) in collaboration with professor Smalley's team and Bob Curl in Houston (USA) who managed to synthesise and characterise the C60 molecule, later named Buckminster fullerene in honour of the architect Buckminster Fuller. Buckminster Fuller is mainly famous for his design of geodesic domes, and in a 1954 patent he described a structure formed by a truncated icosahedron describing a spheroid cage made up of an arrangement of 12 pentagons and 20 hexagons. The principle used in the first synthesis of C60 is the re-condensation of graphite after vaporisation by a laser in a helium atmosphere. This fundamental discovery in the field of "nanoscience" was acknowledged by a Nobel prize in 1996. 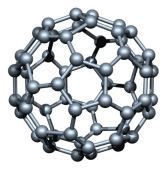