Observed for the first time in 1991, nanotubes are in the form of concentric hollow tubes separated by 0.34 nanometres (sometimes there is only a single tube), with an internal diameter of the order of a nanometre and a length of a few micrometres. These elongated structures may be closed at their ends by the carbon pentagons characteristic of fullerenes.

These filaments have a strength 100 times greater than steel, with one sixth of the weight, together with an outstanding resistance to high temperatures. Their diameter is of the order of one millionth of a millimetre. This value is very difficult for us to appreciate, and to understand it, we could imagine that a carbon nanotube with a length equal to the Earth-Moon distance rolled up into a ball would be the size of an orange pip.

Their electrical, mechanical and thermal properties presage many applications, especially in the fields of microelectronics, materials (for they are potentially a hundred times stronger and six times lighter than steel), for storing hydrogen.

Until 1985, the only known crystalline forms of pure carbon were graphite and diamond.

In 1985 three researchers, R. Smalley, R. Curl (Rice University, Houston, USA) and H. Kroto (Sussex University, Great Britain) discovered a new form of carbon, the C60 molecule made up of 60 carbon atoms distributed over the vertices of a regular polyhedron composed of hexagonal and pentagonal faces.

The discovery of carbon nanotubes is due to S. Iijima (NEC, Tsukuba, Japan) who identified them by electron microscopy in a by-product of fullerene synthesis.

Since then, various specific synthesis methods have been developed, allowing the laboratory study of the structure and physical and chemical properties of these objects. The spectacular nature of the structure and properties of nanotubes in fields from mechanics to nanochemistry, nanoelectronics and point effects in electric fields, has given an extraordinary boost to this research. 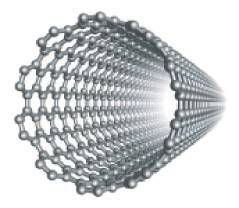 Structure of a carbon nanotube.