The acronym ISO may denote the International Organization for standardization, or the satellite Infrared Space Observatory.

The organisation includes the national standards institutes of more than a hundred countries: Afnor for France, BSI for the UK, ANSI for the United States, DIN for the Federal Republic of Germany, etc. The work of the ISO mainly concerns industry, with the exception of electricity and electronics, which come under the International Electrotechnical Commission (IEC). For information technology and telecommunications, the ISO and the IEC have formed a common technical committee (ISO-IEC/JTC 1).

The ISO satellite, Infrared Space Observatory, of the European Space Agency is the first infrared space observatory ever launched.

This 60 centimetre diameter telescope, cooled down to a few kelvins, is designed to observe the cold dark universe as images and as spectra at wavelengths between 2.5 and 240 metres. ISO has revolutionised our vision of the infrared universe through the high quality data it has sent us, and is a technological, industrial and scientific triumph for both the European and international communities.

ISO was put into orbit on 7 November 1995 by a night launch of Ariane 4 from Kourou in French Guiana. ISO is an ESA project with the participation of the Japanese and American space agencies (ISAS and NASA); it was first proposed in 1979, it was selected in 1983, its instruments were defined in 1985 and the request for proposals for the observations was published in 1994. The ISO infrared spatial astronomy programme culminated in the observation period between November 1995 and April 1998. The total budget was of the order of 700 million Euros.

There are four instruments at the focal point of the 60 centimetre telescope, provided by Germany, France, the Netherlands and the United Kingdom: two spectrometers (SWS and LWS), a camera (CAM) and a spectrophotopolarimeter (PHOT).

In its highly elliptical orbit, after a testing and calibration phase of just under three months, ISO carried out 26 450 hours of observation until its helium ran out on 8 April 1998. The ISO continued to operate ten months more than the scheduled period, with over twenty eight months in operation.

All the real time operations to control the satellite were made from the Villafranca ground station, near Madrid, which now houses the data centre and the public archive for the whole community to be able to use the data. 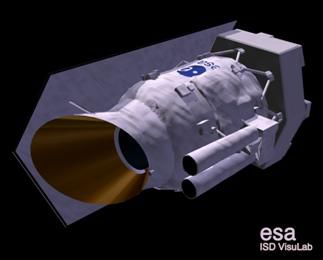