Hydraulic fracturing (fracking) is the massive fissuring of a rock by injecting a liquid at high pressure. Using this technique, oil or gas can be recovered from substrates that are too dense to yield much, if anything, using an ordinary well.

The liquid is usually water to which hard material has been added (sand or ceramic microspheres) to prevent the small fissures from closing once the pressure has decreased. The liquid may also contain other additives to control the viscosity.

The use of hydraulic fracturing

Hydraulic fracturing is especially used in "bituminous shale" where the hydrocarbons are not trapped in porous rocks where they form a sort of pocket, but in the rock itself, often at great depths, the shale being argillaceous in nature and arranged in sheets. In this case, drilling is often done horizontally.

Advantages and disadvantages of fracking

It allows many hydrocarbon deposits to be exploited that are inaccessible using standard methods. The technique is controversial as it causes a number of risks or nuisances. The low density of hydrocarbons means that a large number of wells are needed, each having a short lifespan. There is a presumed risk of sub-soil, or even water table pollution, and the deep drilling technique does not seem to be well mastered at present as far as its geological impact is concerned. 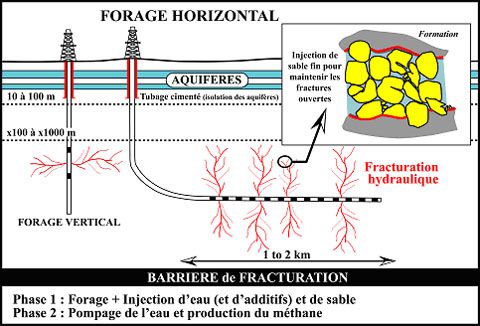 Diagram by the IFP showing two fracking methods using a vertical or horizontal well. The pressurised water produces a network of fractures which are prevented from closing by the solid particles added to the water. These wells are very deep, over 1000 metres below the ground water. © IFP