In geology, a hotspot is a place on the surface of a planet which has regular volcanic activity resulting from the rising to the surface of mantle diapirs from fixed zones where the temperature may be higher than in other zones at the same depth. The material in these zones would be less dense, and would therefore rise under the effect of the Archimedes principle. There are several conflicting theories about the depth of these zones and what makes them unstable causing the formation of diapirs.

Strictly speaking, the notion of hotspots goes back to the ideas put forward by John Tuzo Wilson in 1963. But in the field of plate tectonics, they are often confused with the mantle plumes introduced by Jason Morgan en 1971. In both cases they can explain particular volcanic phenomena. The main reason they were introduced was to explain the volcanic islands of Hawaii. Because the movements of the tectonic plates drag the lithosphere over the diapirs, the hotspots create lines of volcanoes on the earth's surface, such as the archipelago of the Hawaiian – Emperor chain, the Marquesas islands, the Society Islands, etc.

According to Jason-Morgan, the hotspots originate at the base of the mantle, just above the interface between the mantle and the core. But other explanations have been advanced, as can be seen on this site about mantle plumes. 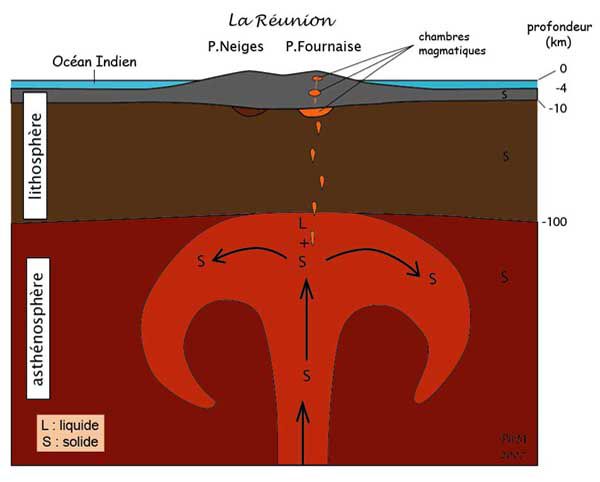 Diagram showing the mantle plume under Reunion island. At certain locations on the planet, very hot (but solid) rocks rise from the depths: this is a "plume". The speed is very low (around 1 dm/year) but the volume is large (tens of km3). On arrival under the very solid part (the lithosphere), some of the rocks melt; the rest cool and sink back down. The liquid, which is less dense, rises (this is the magma) and accumulates in reservoirs (magma chambers). © Philippe Mairine-Adaptation des Programmes à l'océan Indien (APOI)