Gondwana was a super-continent which broke up around 150 million years ago giving the continental blocks of Africa, Arabia, India, South America, the Antarctic and Australia. Gondwana represents approximately one third of the continents of today and contains around 60% of world mineral resources.

During the Paleozoic era, the migration of Gondwana from the south Pole towards the north caused the closure of the Rheic ocean which separated Gondwana from the continental blocks of the northern hemisphere (Laurentia, Baltica, Siberia, Kazakhstan, Northern China etc.).

The collision of these two continental assemblies in the carboniferous period, followed by the resulting closure of the Ural in the Permian, led to the formation of a world supercontinent, Pangea, composed of Gondwana in the south and Laurasia in the north.

The dislocation of Gondwana

From the Jurassic period, Pangea, and consequently Gondwana, fragmented land evolved towards the current configuration of the continents. 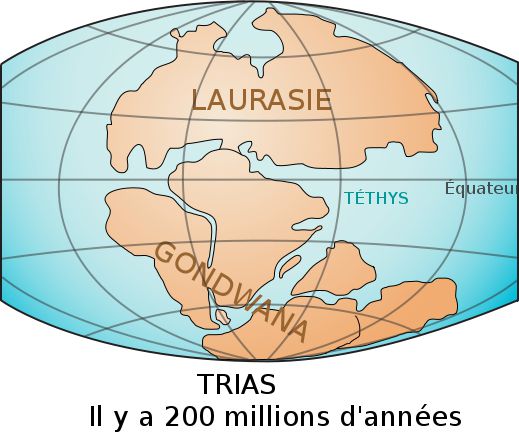