The name fluorite comes from the Latin fluere meaning to melt, flow. Certain fluoride minerals can lower the melting point of various ores, making them more fluid. The phosphorescence of fluorite was discovered by the mineralogist Mohs in the 19th century.

Fluorite (formula CaF2) has been used since the Middle Ages as an agent to liquefy the slag produced in metal smelting. In the 19th century, cryolite (Na3AlF6) was used in the electrolytic preparation of aluminium, allowing a great expansion in the production of the metal.

Fluorite is the main ore of fluorine

The word fluorescence is derived from it. The emission of light by heated fluorite was discovered in the 17th century.

This mineral, which occurs naturally in many places, has been given various names : Spatum vitreum or Calx fluorata amongst others, before it was given the name de fluorite. The commercial and industrial term is fluorspar.

The earth's crust contains less than 0.1 % of fluorine. The colours are due to various elements in the crystal, such as yttrium and europium ions. The commonest are:

After the ore has been concentrated for industry, there are two types of product:

In some cases, fluorspar is in competition with fluosilicic acid, a by-product of the phosphate fertilizer industry.

Fluorite is used to make lenses that are transparent to ultraviolet light. It is used as a flux in metallurgy and is used in the manufacture of fluorine.

In 1994, closure of the Buffalo Fluorspar Mine (South Africa), the largest mine in the world, which used to produce 180,000 t/year.

The ores in France contain about 50 % of CaF2. The definitive end of production in France was in April 2006 (Tarn mines). France consumes around 100,000 t of acidic flurospar and around 20,000 t of metallurgical fluorspar.

Some of the French fluorite mines

A sum total of around twenty production sites and nearly as many mineralogically interesting mines with fine specimens in some places.

Ponts de Pierre Perthuis, Yonne (site of an old fluorite mine). The smallest (oldest) dates back to 1770, and both lie on either side of La Cure. © DR

Acidic flurospar and metallurgical fluorspar share equal tonnages of the world consumption of 3 million t/year. Fluorite is the source of the element fluorine for the chemical industry. It is used to make hydrogen fluoride (HF) :

The silica content of fluorite is limited as much as possible since it consumes the hydrofluoric acid, producing SiF4 and H2SiF6. The gaseous hydrogen fluoride is purified to 99.9%. Over 2 tonnes of CaF2 are required to obtain one tonne of hydrofluoric acid. CaSO4, a by-product, can be used in the manufacture of plaster.

20 to 60 kg of fluorspar are required per tonne of aluminium, representing 1/3 of the world consumption of fluorspar (Data from SFC). The aluminium industry is the largest emitter of atmospheric fluoride, with 75% of emissions. With the high temperature inside the cell during aluminiumproduction, some of the fluorides are released in gaseous form by evaporation of fluoride compounds, polluting the surrounding region unless efficient filters are installed. 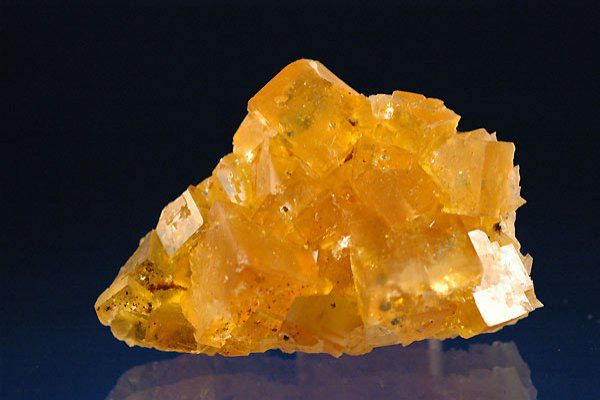