A diapir (from the Greek diapeirein, pierce through) is a structure resulting from lighter rocks rising through denser rocks. It is composed of easily deformable rocks such as salt, or gypsum, magmas, muds, etc. which have risen to the surface under the effect of archimedean thrust. Found in geology, this phenomenon is actually the result of a more general fluid physics mechanism known as the Rayleigh–Taylor instability.

Named after the two British physicists, Lord Rayleigh and G.I. Taylor, the Rayleigh–Taylor instability is the result of the thrust of a denser fluid on the less dense fluid at the interface separating two fluids of different densities. Therefore it is the gravitational instability inherent in a low density fluid lying under a denser fluid. 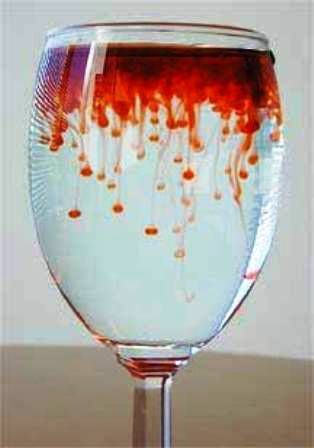 An example of Rayleigh–Taylor instability forming diapir shaped structures is shown in this photo. The coloured water is denser and plumes form by plunging into the less dense zones. © James Riordon, AIP