Chicxulub, according to several scientists, is a meteorite crater over 10 kilometres in diameter, the meteorite is supposed to have crashed into the Earth around 65 million years ago, i.e. at the end of the Cretaceous period.

It is supposed to have been between 160 and 240 kilometres wide. This meteorite strike may have marked the end of the secondary era and the massive extinctions that occurred. This meteorite crater is said to be located at Chicxulub in the north of the Yucatán peninsula in Mexico. 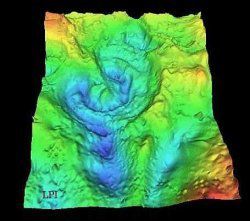