A tsunami is a tidal wave generally caused by a sudden movement of the sea floor during an earthquake; a marine disaster in which a sudden enormous and devastating wave is caused by seismic action (earthquake, volcanic eruption or huge landslide), a cyclone, or even nuclear weapons, particularly in the Pacific.

Generally, tsunamis are caused by major submarine earthquakes (magnitude > 7) at very shallow depths (< 50 km). The intensity of a tsunami depends both on the magnitude and the depth of the earthquake: the shallower it is, the more likely it is to generate a major tsunami.

The wavelength of ocean waves is of the order of several hundred kilometres and their amplitude in the deep ocean is very small (of the order of one metre). Their speed is generally between 500 and 700 km/h, but may exceed 800 km/h. 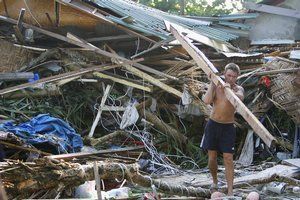 The consequences of the26 December 2004 earthquake (Indian Ocean).