The Arctic is a region of the Earth at the North Pole. It has different limits depending on definitions, but globally it is the region north of the Arctic circle.

Limits of the Arctic

The Arctic is a region of which the limits are subject to debate. From a geographical point of view, the Arctic is agreed to be the region north of the Arctic circle in the northern hemisphere. The political definition includes other territories such as Lapland.

The ecological and meteorological limit of the Arctic is defined by an isothermal of 10°C in the month of July. Below this temperature trees no longer grow.

The Arctic ocean, on the other hand, is perfectly delineated. It has a surface area of 13 million square kilometres and is over 4000 metres deep.

The Arctic and the ice field

September is the month, after the summer, during which the ice field traditionally reaches its annual minimum surface area.

In March, on the other hand, the size of the ice field generally reaches its maximum at around 15 million square kilometres.

Unlike its Antarctic counterpart, the Arctic has quite substantial biodiversity.

Although the frozen ground prevents trees from growing, the terrestrial Arctic regions are covered in tundra.

The ocean is obviously rich in plankton and krill. 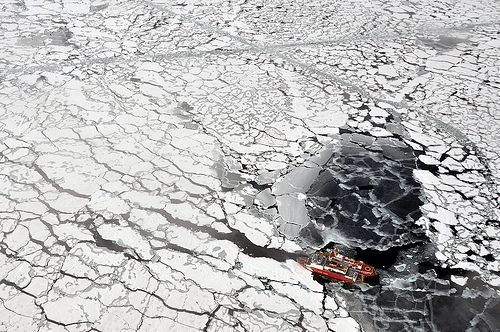 In the Arctic, part of the sea is covered with ice floes. © US Ecological Survey, Flickr, cc by 2.0