The Antarctic is one of the Earth's continents. It is mainly covered in ice called inlandsis. It is the coldest continent and therefore flora and fauna are scarce.

The Antarctic is a continent at the South Pole. Its surface area is around 14 million square kilometres — including the ice-shelves that float on the ocean — , making it the fourth largest continent. It is surrounded by the Southern ocean.

Nearly the whole of the Antarctic is covered in ice (about 98 %) called inlandsis. The thickness of the inlandsis varies between 1300 metres in the west and 2200 metres in the east, on average. Its maximum thickness is nearly 5000 metres.

The Antarctic is also the highest continent in the world with a mean altitude of 2300 metres.

On the inlandsis, fauna and flora are virtually absent. On the other hand, on the coasts and in the Antarctic ocean, there is greater diversity.

There are around forty species of birds, including petrels, skuas, terns and penguins. The ocean is rich in plankton and krill and there are also nearly 300 species of fish. There are a few mammals too (cetaceans and pinnipedia).

The flora is quite rare and is limited to a few lichens, mosses and algae. There are only two flowering plants on the peninsula.

As it is the coldest continent, its climate has been particularly well studied, especially its temperature variations. Many scientific bases have been set up on this continent, such as the Franco-Italian Concordia base (see map below), the American McMurdo station and the five British Antarctic Survey bases. The mean temperatures vary from -20°C at 1000 m altitude to -55°C at 3500 m. The minimum recorded temperature was at the Russian Vostock base: -89.3 °C.

There is little snowfall in the Antarctic and the winds are quite light (around 10 km/h inland and 50 km/h on the coasts) but gusts can blow at over 300 km/h. 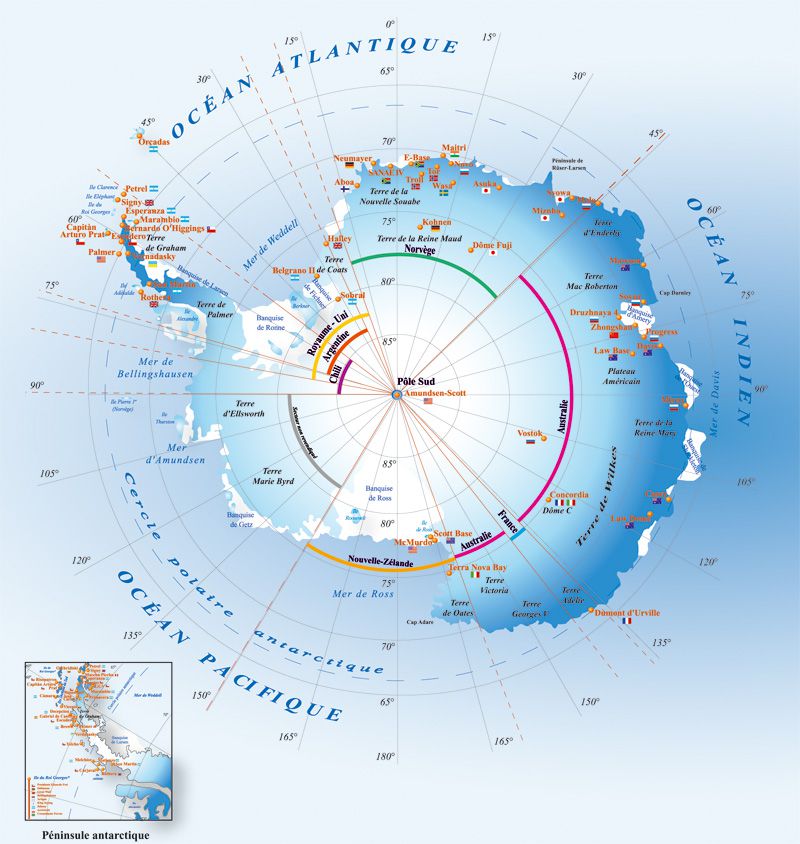 The Antarctic is a continent at the South Pole. There are many scientific bases there© IPEV, DR