The term cluster can be used in several domains, including technology and astronautics.

A set of sectors making up a logical zone on a disk.

Hardware architecture associating several machines (from 2 to 8) using a very high speed bus. This architecture is usually complemented by breakdown-tolerant software to ensure the constant availability of data even if one of the machines breaks down.

The ESA Cluster mission comprises four satellites launched by two Russian rockets in the summer of 2000. These satellites are at present orbiting in formation around the Earth and transmitting three dimensional data of unprecedented precision on the influence of the solar wind on our planet. The solar wind is a continuous flux of subatomic particles from the Sun that can damage telecommunications satellites and even our power stations. The Cluster mission is to continue until at least 2012.

Cluster is one of the missions of the "International Living with A Star" (ILWS) programme. The purpose of this initiative, involving space agencies from all over the world, is to study how variations in solar activity affect the environment of the Earth and other planets. Research is mainly focussed on aspects of the Sun/Earth system which could impact human life and the organisation of society. The ILWS is the result of collaboration between Europe, the United States, Russia, Japan and Canada.

It was on 9th November 2000 that Cluster first got a glimpse of the constantly changing magnetic battlefield. At the time, the four satellites had begun a series of crossings through the magnetopause, the frontier separating interplanetary space (where the solar wind reigns) from the region dominated by the Earth's magnetic field.

These intersections between the orbit of the satellites and the magnetopause surprised the Cluster scientific team since they were occurring about a week in advance of forecasts.

The data sent by Cluster showed that the gusts of solar wind cause dents and lumps to appear at the surface of the magnetosphere. These rapid variations of the borders of the magnetosphere meant that the satellites were located alternately inside and outside the Earth's magnetic field. For the first time it was possible for the researchers to receive data simultaneously from both sides of the magnetopause, which can only be achieved by a mission combining several satellites. 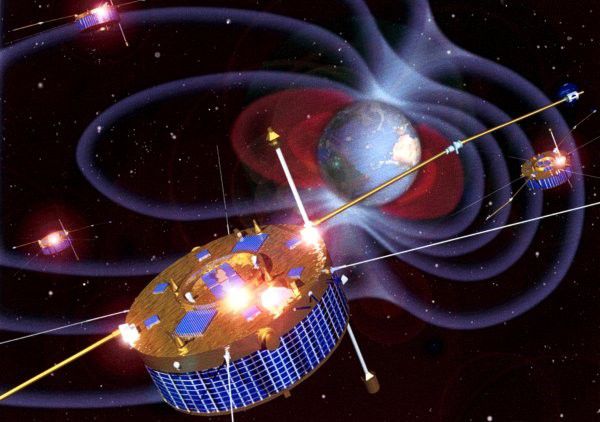