A cellular automaton is a mathematical object that is also studied in computer theory; it changes in steps according to very simple rules that to a certain extent imitate the self-reproducing capabilities of living creatures. It consists of a grid with squares called "cells" that can be in one of several states, usually two: "alive" or "dead". The simplest application is the Game of Life, devised in 1970 by the British mathematician John Horton Conway.

A cellular automaton's most striking feature is the astonishing difference between the simplicity of the rules and the complexity of the results obtained through the application of the rules.

The principle is based on the ideas and work of John von Neumann and Stanisław Ulam in the 1950s. They were trying to explore the ways in which an artificial structure could behave, or appear to behave, like a living creature. 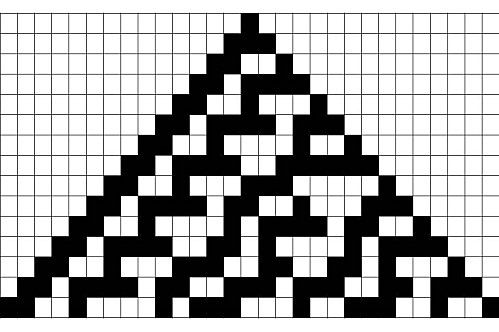 An example of the Game of life. The lines represent the steps, starting from the top. The rules for determining the colour of a cell are defined depending on the colours of neighbouring cells on the line on top (previous). An initial state is defined (on the first line), the colours in the line beneath are determined and the game continues. Depending on the rules and the chosen initial state, more or less complex patterns are obtained; they can be repetitive, have regularities or not change at all. © DR