La Niña is a climatic phenomenon. It is not very well understood, but results in a drop in surface water temperature in the East Pacific, around the equator (see the map below).

La Niña received its name because some of its characteristics are the opposite of the effects of El Niño, such as the strengthening of the trade winds in the West Pacific. This is accompanied by changes in the ocean temperature layers.

La Niña does not affect all areas of the globe in the same way. Thus, it causes an increase in the number of cyclones in the West Pacific, a tendency for drought in East Africa and in eastern South America, and increased humidity in Southern Africa.

Note that the temperature of the surface water which cools in the East Pacific is favourable to the proliferation of nutrients and therefore the fish that feed on them, which is an advantage for fishing.

La Niña occurs every four or five years, and lasts for about two years. But the rhythm of this phenomenon frequently departs from this rule. 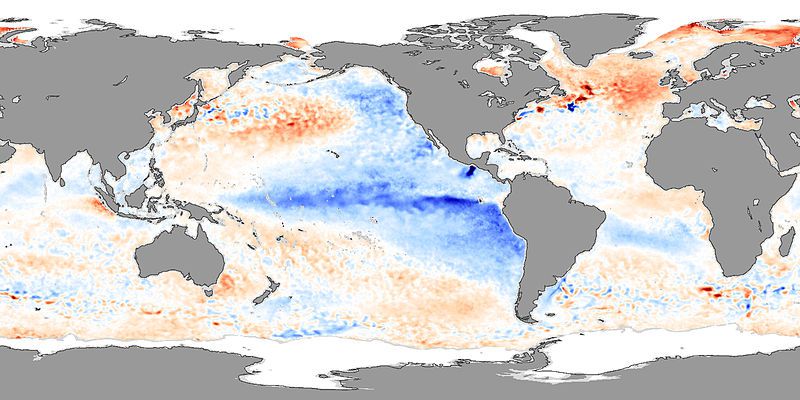 In 2007, La Niña caused temperature anomalies. On the map, the cool colours (blue) represent a negative anomaly, or a drop in temperature. One can see the cooling of the surface water in the East Pacific and particularly along the American coasts. © Nasa - Jesse Allen