Polytetrafluoroethylene (PTFE), or teflon, was discovered in April 1938 by the chemist Roy Plunkett while working for the American chemical company E.I. du Pont de Nemours and Company. It is stable to high temperatures with high chemical inertia and anti-adhesive power. It was discovered accidentally by Plunkett while he was working on the development of a new refrigerant by cooling tetrafluoroethylene gas in dry ice.

It was the first frying pan coated with Teflon non-stick resin under the brand name of Tefal (the contraction of Teflon and aluminium) in the United States in 1956 that made the polymer a household name. But its first application was in the Manhattan project. PTFE was used for the seals in uranium 235 production for nuclear weapons. It was the only material able to resist the corrosive acids formed during the production of uranium. 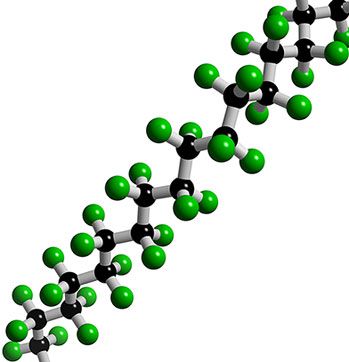 Part of a Teflon molecule. The fluorine atoms are green and the carbon atoms are black. © Karl Harrison