A porosity is an open or closed micro-cavity, due to the trapping of gas (air, solvents, reaction products) in a laminate.

Porosities always tend to deteriorate the mechanical properties of the material. They are considered to be defects. They are very small on the scale of the thickness of a single layer.

They are sub-divided into two categories:

They appear after poor compacting or are caused by a degraded prepreg.

The top photo is an end view of a laminate: we can see a distribution of porosities between layers. The bottom photo is a top view parallel to the plane of the layers: you can see the shape of the porosities in a layer after de-lamination of the material.

In a metal porosities called "blowholes" or "blisters" are minute cavities filled with hydrogen and nitrogen caused by the release of oxides of carbon from the reduction of iron and manganese oxides during the final additions while the ingot is being cast.

In a composite material with a metal matrix they appear during densification or strengthener impregnation (generally used in the form of a preform). 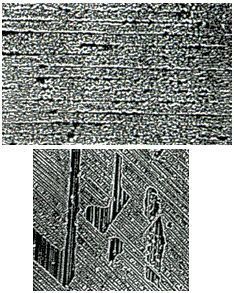