As its name indicates, graphene is obtained from graphite; it is a simple two-dimensional sheet composed of carbon atoms arranged in a hexagonal pattern. With a thickness of only one carbon atom, such sheets, stacks of which form the graphite in pencils, were thought to be physically impossible. Such a material apparently contradicted a mathematical result in solid state physics known as the Mermin-Wagner theorem. The latter was a precise formulation of an argument (closely related to the notions of symmetry breaking) given by another Nobel physics prize winner, Lev Landau, "proving" the impossibility of a two-dimensional crystal lattice.

However, the obstinacy of Andre Geim and Konstantin Novoselov, two physicists who were to be awarded the Nobel prize in 2010 for their discovery, eventually bore fruit when the two researchers managed to isolate graphene sheets in 2004. Retrospectively we know that the no go theorem does not apply if the lattice is wavy.

Laboratory work has shown that graphene transistors are potentially capable of replacing silicon transistors, opening the way to smaller, faster, more powerful computers. Transparent and as good a conductor as copper, graphene could be used for touch screens, luminous panels and probably for solar cells.

The addition of only 1% of graphene a to plastic material is expected to make the material electrically conductive. Its thermal resistance should increase from 30 ˚C, and its mechanical strength too (graphene is known to have a tensile strength 200 times stronger than steel). Interesting graphene based composite materials should appear in the near future, with applications in satellites, aircraft and cars.

From a more theoretical point of view, quantum mechanics is involved. Although electrons move 300 times more slowly in graphene than light, the conditions to which they are subjected mean that they must be described mathematically using the Dirac equation, like a relativistic particle with practically no mass! As a result, certain phenomena analogous to those normally encountered in relativistic quantum field theory can occur in graphene. Thus particle physics can be simulated using graphene. Better still, analogous and mathematical connections with string theory calculations are being studied. 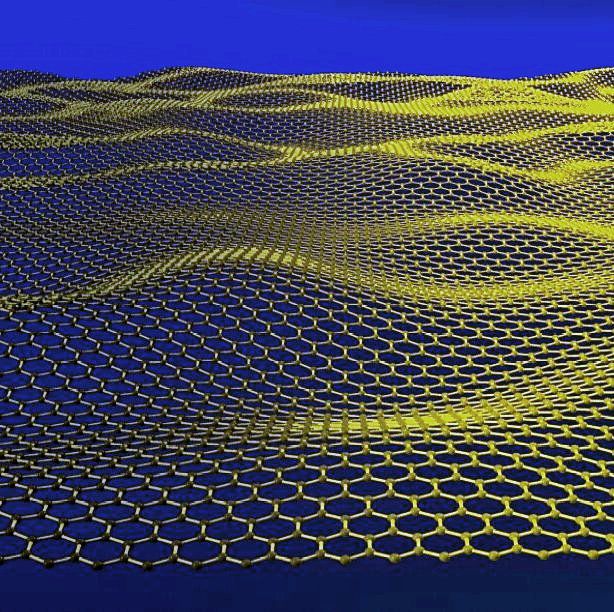 The 2D structure of a graphene sheet. © Jannik Meyer