An enzyme is a protein that catalyses a biochemical reaction.

The structure of enzymes

Enzymes are usually proteins, and are therefore made up of chains of amino acids. Enzyme activity is sometimes carried by RNA, which in this case is called a ribozyme.

The important part of the enzyme is the active site. It is on this site, which often takes the form of a cavity, that the substrate is fixed, where it can then undergo the action of the enzyme to transform it into a product.

Each protein enzyme has a structure adapted to its function, and may be in monomer form, while others are in dimer or higher polymer form. They may then be associated with several protein chains coded by the same gene (homo-dimer) or coded by different genes (hetero-dimer).

The role of enzymes is to accelerate (catalyse) chemical reactions millions of times in living organisms. There are a large number of specific enzymes that play an important role in physiological processes (digestion, nerve conduction, hormone synthesis etc.).

It is however possible to classify enzymes into six categories according to the biochemical reaction that they catalyse :

It is only the substrates and products that vary from one enzyme to another. 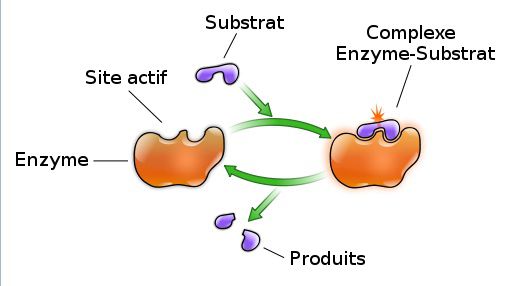 The active site of an enzyme is where the enzyme reaction takes place. © YassineMrabet, Wikimedia, CC by-sa 2.5