The word " cinnabar" is from the Greek (kinnabari) and the Latin (cinnabaris) which are themselves from the Persian (zanjifrah). Its etymology is not, however, absolutely clear. Cinnabar was probably used, like vermilion, very early on in Greece and Egypt (Fayum), in India and in China (China red), then in Roman times as is proved by the frescoes in Pompeii. It was very expensive and therefore trafficked by some painters. The history of vermilion is linked to that of cinnabar, and to minium too, because from ancient Roman times,&amp;nbspcinnabar and miniumwere mistaken for each other and both were called " minium". This confusion continued during the Middle Ages.

Cinnabar bark. A piece of birch bark discovered at Nadlok and dyed using cinnabar. Nadlok: a place connected with the Copper Inuit in Canada. © DR

Actually, vermilion is in the cinnabar family and minium is in the lead pigment family. All these substances are toxic and cinnabar was banned in the 19th century.

The properties of cinnabar. © DR

Pliny said that cinnabar was as expensive as Egyptian blue and fifteen times the price of African red ochre.

In the Middle Ages, in the Orient, the most important documents were signed using a cinnabar based ink (only the emperor could use it) while in the west in the 12th century some manuscript illuminations were made using cinnabar and sanguine based inks. Artists of the time isolated this substance, which they knew reacted with other pigments, using varnish, and protected it from the Sun's rays by applying a glaze.

The word vermilion comes from the word "ver" meaning "small worm". It probably denotes red pigments with no connection to cinnabar but perhaps with cochineal. The link appears to have been made in 1687 when a new pigment named " vermilion", referring to vermeil, was created. It was recovered from the sides of a clay pot filled with sulphur and mercury and heated. It was in fact a condensed gas, mercury sulphide. There is chemically no difference from cinnabar except that vermilion was produced artificially whereas cinnabar was available in a natural state. In both cases it was expensive.

Genuine vermilion and cinnabar are incompatible with lead, the main siccative in oil paint because they contain sulphur. They darken in the light. Despite the incompatibility they are used in oil paint, in watercolours and gouache, and these harmful poisons only disappear gradually.

Furthermore, they are still produced in China, and the grain is more or less fine: for a shiny cinnabar the grains have diameters of less than 20 micrometres and can measure from 50 to 100 micrometres in diameter for matt colours. The Chinese also have a special technique for dissolving cinnabar. It remains no less toxic than arsenic colouring agents.

The most well known legend about cinnabar was told by Pliny: a dragon, having its blood burning in its own body, used it to refresh the blood of an elephant.

To find out more, go to the webmineral.com site. 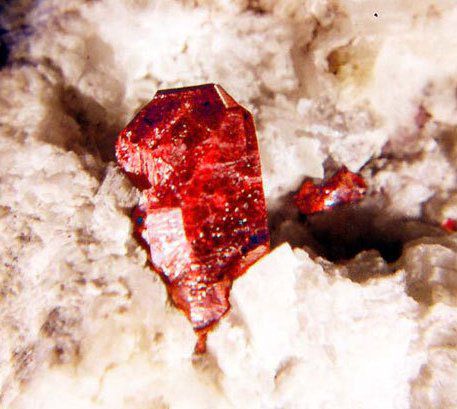