Chromium is a chemical element, symbol Cr and atomic number 24. Etymologically, its name comes from the Greek chroma meaning colour, because chromium compounds have a range of colours.

Chromium and the human organism

The way it acts has not yet been fully explained, but it is known that chromium acts as a co-factor of insulin, facilitating the assimilation of glucose by the cells.

All the properties of chromium. © DR

Hard chromium plating: the lowest friction, and one of the hardest, of the anti-wear coatings. With an excellent quality/price ratio, it protects new parts and repairs. Hard chromium is food-safe and does not harm the environment.

Hard chromium is a coating that is electroplated onto all types of support: steel, stainless cast iron, copper, bronze, aluminium alloys etc.

It withstands practically all chemicals (except hydrochloric acid), even at high temperatures. It is inoxidisable up to 800°C. Its exceptional hardness is from 1000 to 1100 vickers.

The chromium/steel friction coefficient is half that of steel/steel Chromium plating gives a fine appearance and adheres to the support very well (molecular binding). Hard chromium plating lines that have recently been fully computerised can have baths of up to 50,000 litres.

An example at Geneva : (excerpt from the official site of the city of Geneva)
"On 19 December 2000, following the contamination of a site requiring rapid decontamination, Monsieur Cramer, State councillor in charge of the department of the interior, agriculture, the environment and energy, stressed the importance of establishing a map of contaminated sites.

Excavations and borings were carried out on the plots and soil samples were analysed. The results of these analyses show that soil pollution by chromium VI was mainly confined to the plot. The concentration was very high under the chromium plating shop floor (326 mg/kg), diminishing with depth (5.4 mg/kg at a depth of 6 metres). Less extensive and lighter pollution was also found by the analyses, especially by cyanides and other heavy metals (lead, cadmium, zinc). A boring was carried out at the edge of the plot to sample the water from the water table and carry out analyses. The measured concentrations of Cr VI (max. 0.29 mg/l, min 0.14 mg/l) clearly show that the water table has been locally reached and that the site is contaminated and needs to be decontaminated. "

Another example in the Oise river in France:

"The case of the water table in the Aronde valley chalk (Oise département): a localised plume of pollution by hexavalent chromium (2 km long and 200 m wide) contaminated a public catchment following the release of rinsing water and baths into a basin and a sump by a chromium plating factory. The concentrations of this heavy metal varied from 3.5 mg/L upstream to 0.8 mg/L downstream. After five years of environmental remediation pumping, the levels in the catchment had fallen from 0.4 mg/L to 0.005 mg/L. "(Mme A. Desbordes - Pollutions des eaux souterraines en Picardie(Groundwater pollution in Picardie). Memoire. Masters degree, Faculté des Sciences, Amiens, 50 p. + appendices.-2000-)

The soil of Reunion Island is very rich in micropollutants. © DR

The soils of Reunion Island, amongst others, are very rich in trace metallic elements, potential river, soil and food micropollutants. A team from Cirad (a French research centre for agriculture and development) recently showed that on an island these elements have a natural origin. Today, work is being carried out to study their mobility and the risks of toxicity in food. (Cirad, Agronomic research at the service of southern countries, see bibliography)

The toxicity of chromium

The World Health Organisation set the concentration limit of Cr VI in water at 0.050 mg/litre.

Most of the chromium in the air settles and ends up in the water or the soil.
In the soil the chromium binds to soil particles and does not reach the groundwater. In water chromium is absorbed by sediments and is immobilised, only a very small quantity dissolves. Water transports heavy metals, incorporating them into the food chain (seaweed -> plankton -> fish, etc.). Even if only traces of heavy metals are present, they are very dangerous because of bio-accumulation in organisms.

Acute intoxication can cause tubulonephritis : kidney failure Chronic intoxication is accompanied by lesions of the skin and mucous membranes that can reach the lungs and cause bronchopulmonary cancer.

"In coastal waters chromium contamination is higher in particle form than in dissolved form. The least contaminated rivers have dissolved chromium concentrations of the order of 1 to 2 µg/l. In the aquatic environment, lower organisms are more sensitive than fish. Furthermore, hexavalent chromium, which is toxic to fresh water aquatic fauna at a relatively high concentration, is much less toxic in salt water". (Ifremer Monograph Basse-Normandie coast) 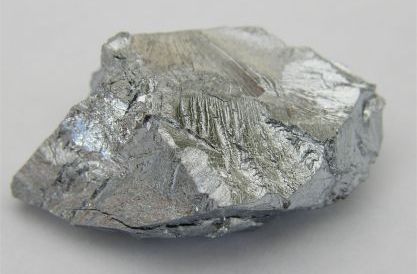