The yew is a tree that can reach heights of between 8 and 10 m, with some specimens growing up to 15 m. Some specimens of this species in Normandy and Great Britain are over 2,000 years old!

The yew, from the Taxaceae family. © The justified sinner, Flickr CC by nc-sa 2.0

The yew (Taxus baccata) is a member of the Taxaceae family. It is often considered to be a resinous tree, although in fact it is a rare non-resinous gymnosperm. It differs from conifers by the fact that its fruit is not a cone.

Botanical description of the yew

Very stocky in appearance, this tree has a short trunk divided into large branches located very close to its base. Its structure is rounded. Its bark forms large brown-mauve or red plates. Its persistent leaves are flat, dark green needles. This is a dioecious species, with yellowish male flowers that are tiny round catkins.Its female flowers are greenish and look like buds in the spring. In the autumn its fruit, called an aril, is bright red and encloses a single, highly toxic seed.

The yew has always been widespread throughout Europe, North Africa and the Middle East.

Growing conditions of the yew

This species grows very slowly. It prefers shady locations in the humid forests of the low mountains and plains. The yew prefers humus rich soils but can also grow in calcareous land.

The wood of this tree is brown-red, veined and flexible. It was used to make bows in the past. The yew is mainly used as an ornamental tree, and, much like the box tree, is particularly used because it easy to cut into beautiful topiaries. 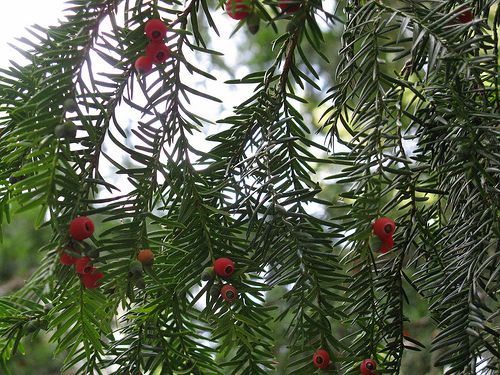