Water primrose, or Ludwigia, is an aquatic plant from South America and the Southern United States. It was introduced into France between 1820 and 1830 to decorate ornamental ponds and aquariums.

It belongs to the Oenotheraceae or Onagraceae family with two species: Ludwigia grandiflora or Ludwigia urugayensis and Ludwigia peploides or Jussiaea repens, which have similar characteristics and properties. It has become a formidable invader of natural wetlands and still aquatic environments. Since the early 1990s its proliferation in the west of France has extended northwards, invading still wetlands up to the Belgian border.

There are other species of the water primrose in France, Ludwigia palustris or the marsh seedbox, which is a small, short perennial plant; its stems and its leaves are tinged with red and it produces tiny greenish flowers without petals. It is not an invasive species. It is strongly recommended not to use the water primrose as an ornamental plant due to the risk of its uncontrollable proliferation and propagation.

Description of the water primrose

It produces long , practically smooth stems which grow horizontally in the water, on the water or even in the mud. Spongy roots grow on the immersed stems. Its pointed or elliptical leaves are alternate and attached to the stem by a short petiole.

Its long florescence begins in summer producing spectacular large bright yellow flowers (5 cm in diameter). The calyx has 5 sepals which remain after the petals fall off. The 5 veined petals are narrower at their base, which is tinged with orange. Ten stamens are overshot by one long stamen.

Flowers are solitary and grow from the axil of the upper leaves; the floral stem is straight and can rise 20 to 100 cm above the surface.

The fruit is a cylindrical capsule. The seeds are very small.
Its reproduction using cuttings makes it formidable: the smallest sprig of the plant can give life to an entirely new individual…

This plant grows very quickly in wet soil or directly in the water. It can double its weight every 2 weeks if conditions are favourable, and form very dense, inextricable plant settlements that eliminate other plants, especially watermilfoil which provides shelter for fauna and is a basic dietary staple for fish.

The consequences of the unplanned growth of water primrose include :

The invasive power of the water primrose is all the more formidable as it is almost impossible to eliminate it for several reasons:

An example of the fight against the water primrose

The Regional Hunters' Federation of the Loire-Atlantic region, which manages part of the Grand-Lieu lake, when confronted with the water primrose problem, implemented a major operation since July 2003 to limit the plant's proliferation.

The water primrose was removed manually from the water: this was meticulous work as all the cuttings had to be collected to prevent the plant's proliferation.

The banks were treated chemically. In two months, 170 tonnes of fresh matter were collected and used to make compost in a risk-free area... the compost produced using the water primrose was tested to see if the plant would grow back...This operation, which was supported by the regional council, must be repeated to prevent a major return of the water primrose to the Grand-Lieu lake, which remains a wetland of international importance for migratory birds. 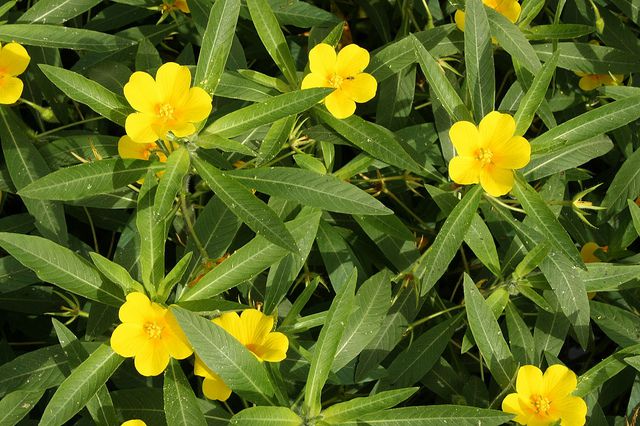 The water primrose is an invasive plant. © poil0do, Flickr CC by sa 2.0