The teasel has almost disappeared today. It still exists in some places in a more or less wild state but is no longer intensely cultivated as it was during the 19thcentury.

Its dried flower heads were stringed onto supports and used to card the wool and felt used tomake luxury coats and uniforms, billiard table cloth or mohair blankets…

Other species of teasel noted by Telabotanica

Teasel was mostly cultivated near manufacturers of fine linens, there were still 2,500 hectares of teasel crops in France in 1862 in Victor Hugo’s time.

Teasel was grown for export in St-Remy-de-Provence for almost a hundred years...it was also widely grown in the Picardy region.

According to sources it was also grown in other regions and towns.

Sheep are generally sheared in May; however, at high altitudes, sheep are sheared in February: thus, when the flock is outside, the wool will have regrown and the sheep will not feel the cold. Shearing is carried out using special scissors called shears: two triangular blades connected by a steel spring. The wool forms a consistent fleece but is greasy and must be washed and left to dry: this stage is called scouring.

Combs for carding by hand. © DR

Once washed the wool must be untangled and the remaining bits of dirt and pieces of plants must be removed: this stage is called picking. If this step is skipped, the dirt will be incorporated into the thread making it irregular and less solid in certain places.

Combing is a long and tedious process using two combs. One of the combs is passed through the wool coming out of the other comb and vice versa. To facilitate the movement, the wool must be oiled and the combs heated…

Carding: Once clean, the wool strands must be untangled. Carding is the last step in preparing wool before spinning. It further cleans and separates the fibres, and makes them straighter. Manual cards are two wooden boards with metal spikes. The wool fibres are brushed using the metal spikes to align them. This can also be done using a pair of curved-tooth combs which are passed back and forth. Cards are mounted on a board which makes it possible to hold them when seated. Different colours of wool were mixed during carding…

Carding machine from the 20thcentury. © DR

After carding, the wool could be spun, but to produce a better quality thread, it was best to comb it again. Strips of very fine wool are extracted from the comb, which can be used to make dolls that are placed in the distaff to be spun.

The spinner passes the distaff through her belt and under her left arm. She introduces the wool and begins the thread by stretching the strands of wool and twisting them by hand. Periodically, she rolls the thread around the spindle. 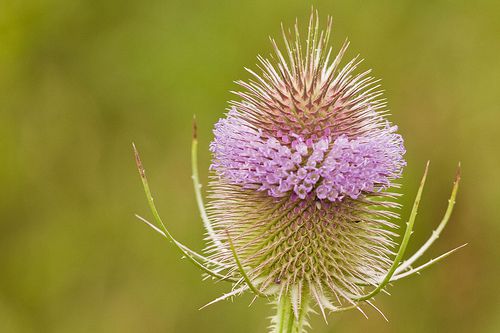