The silver birch is a very majestic tree of which the bark, of a silvery-white colour, always attracts attention.

It grows throughout Europe and particularly in Siberia. In France, it is sometimes found in large numbers, notably in the Fontainebleau forest and in the Sologne region. This species can reach 20 to 30 metres in height.

The silver birch (Betula pendula) is part of the Betulaceae family and may also be called the "warty birch", the "weeping birch" or even the "European weeping birch".

The outline of this species is well spaced, and branchlets droop from the ends of its branches. The bark of its trunk peels off in large strips. Its deciduous leaves alternate between shiny and smooth and have serrated edges. They are triangular and become very slender near the tip. It produces elongated cones that measure 10 centimetres in length, raised and then pendulous for the male and 3- centimetre long raised cones for the female.

This species comes from Europe and Northern Asia. In the Middle Ages, people used its branches to whip people believed to be insane, to chase away evil spirits.

The tree grows quickly when young, and then more slowly with age. It prospers in a variety of soil types, but prefers sandy clay soil. It does not grow well in shade, even slight shade. It does not withstand transplantation well, and may go into a vegetative state for several years before resuming growth, which is why it is important to transplant it early in the spring, with a good ball of soil.

Its wood is very light and is used to make paper pulp. Carbonisation of its wood and bark produces a type of tar that is useful for coating hides and waterproofing shoes. 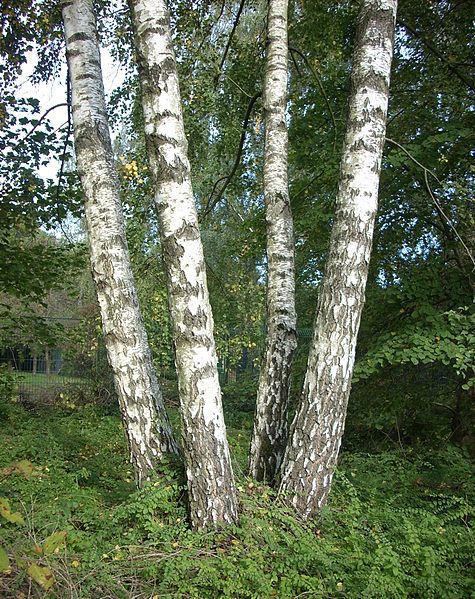