Adults and children alike enjoy potatoes, which can be prepared in a variety of ways.

The potato, imported to Europe during the 16th century, contains an average of 85 kilocalories and 20 grammes of carbohydrates per 100 grammes, or three to six times more than other fresh vegetables, which makes it a good source of energy. In addition, it contains several minerals, especially potassium, phosphorous and magnesium. Potatoes contain significant amounts of vitamins B1 and B3. Moreover, a plate of potatoes provides an average of 18 milligrams of vitamin C, over 20% of the daily requirement. However, in order to retain the potato's nutritional value and facilitate digestion, it is best to steam or bake potatoes instead of frying them.

There are a number of varieties of potatoes. The characteristics of each variety are adapted to how they will be cooked. Thus, the Belle de Fontenay and Charlotte varieties are firm and can be eaten in salads, boiled or roasted. The Monalisa variety, with very starchy flesh, is used in gratins or mashed. The Vitelotte variety is a purple potato, and can be eaten as chips, crisps or mashed.

In France, an average of 30 kilogrammes of potatoes are eaten per inhabitant, per year. Not to forget the 25 kilogrammes consumed in the form of transformed products, such as chips, or ready to cook meals. According to a Sofres survey on behalf of the CNIPT (the French National Interprofessional Potato Committee), 47% of housewives use potatoes in their soups, 39% eat them plain, 27% use them to liven up salads as well as roast them. 23% use potatoes in recipes for stews, and finally, 23% use them to make chips and 21% mash them. 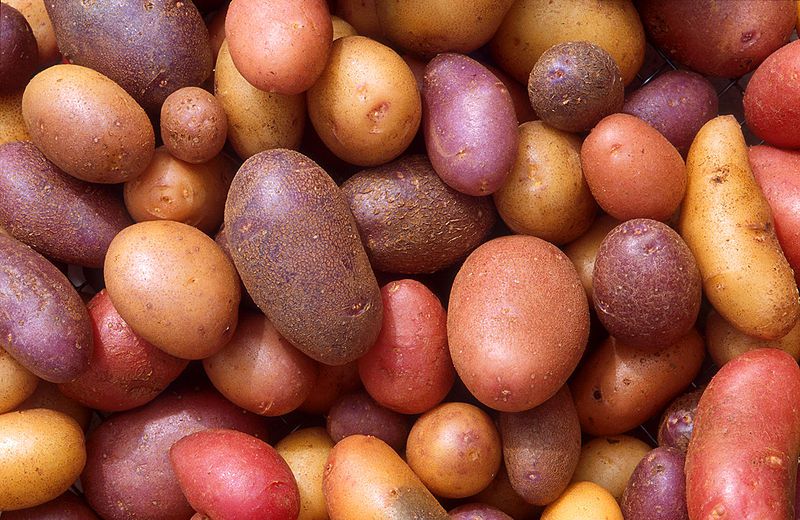 There are many varieties of potatoes. © DR