The scientific name of poison ivy is Toxicodendron radicans, but it is still sometimes referred to by its former name, Rhus radicans.

Poison ivy should be avoided, and may be found in several forms: shrub, trailing or climbing vine. It is a perennial, woody plant found in dense settlements on the edge of woods, on uncultivated land and along the sides of roads or watercourses. It spreads through dispersion of seeds and underground stems (rhizomes).

Its shiny leaves are arranged in an alternate pattern and each cluster has three leaflets. The petiole (small stem) of the central leaflet is much longer than those of the side leaflets. The edges of the leaflets are often uneven, either smooth or serrated, with well-defined veins. The leaves are reddish when they appear in the springtime and then turn dark green in summer. When autumn comes, they turn yellow, red and orange. Their size may vary considerably.

During June and July, poison ivy produces clusters of small whitish to greenish flowers that are often hidden by the leaves. In September, round waxy fruit about the size of a pea appear. Their colour turns from green to white yellow. The clusters of fruit may remain on the bare plants throughout winter.

The sap of poison ivy contains urushiol, an allergen that causes painful skin inflammations (allergic contact dermatitis) in about 85% of the population. Urushiol is found in all parts of the plant, except the pollen. This substance is released when the plant is damaged. Urushiol is oily and non-volatile, and can easily adhere to tools, clothing or animal fur. It may retain its toxicity for a very long time.

As an urushiol reaction is an allergic reaction, people are not affected from the first contact. However, most people are sensitised at the time of first contact and may develop dermatitis during a subsequent exposure.

Among sensitised individuals, symptoms generally appear within 24 to 48 hours after contact with the plant or with a contaminated object or animal. The severity of the reaction depends on individual sensitivity, the quantity of sap that came into contact with the skin and the areas of the body exposed.

The first sign is severe itching accompanied by redness. Swelling may occur and blisters may form. These blisters may burst, ooze and scab. Contact with the fluid oozing out from the blisters cannot, however, spread the dermatitis.

In most cases symptoms disappear within 7 to 10 days. However, it may take over 3 weeks for severe reactions to heal. 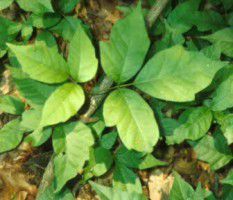