Plum eaters must act quickly because the plum season only lasts six weeks from mid-August to mid-September. The average French harvest is about 15,000 tonnes per year. It is best to choose plums with freckles or small blemishes on the skin, which are the signs of ripeness.

With 52 kilocalories per 100 grammes, plums have a low calorie content. Eating plums has several advantages as they contain many minerals and trace elements such as potassium, iron and magnesium. Plums are not, however, very rich in vitamins. This deficiency is made up for by the anthocyanin content of plums.

Plum varieties available in France include the greengage, the mirabelle and the damson plum varieties. Greengages represent a third of the French production of fresh plums. Mirabelles are also highly valued. Another variety, called the Ente, is known and used to produce Agen prunes.

As opposed to other fruit, plums are best stored when placed in the vegetable crisper of the refrigerator. It is nevertheless best to eat them as quickly as possible after purchase to enjoy the full freshness of the fruit.

Plums can be cooked with roast poultry. In this case it is best to brown the plum halves and serve them hot. For dessert, plums are frequently used to make zabaglione gratins. Mirabelles can be used for pies combined with almonds. 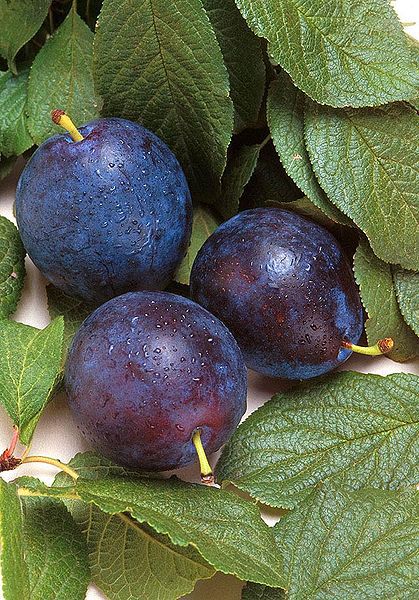 The Damson plum is a plum variety eaten in late summer. © DR