Christopher Columbus "discovered" this fruit when he arrived in Guadeloupe in 1493. The pineapple, which Native Americans called " nana nana" (fragrance of fragrances), is originally from South America, probably northern Brazil, or Central America and the Caribbean.

The fruit of this low plant forms on a spike and has yellow or green and brown skin. Pineapple grows on most oceanic islands but needs well-composted and well-drained soil. Pineapple plants do not cover the soil very much, and the soil is exposed to the sun. This can encourage the quick growth of adventitious plants.

Pineapple can be planted in rows or individually. As a plant material its bulbs and crowns are especially used. The bulbs grow around the base of the plant when it reaches maturity and bears fruit. They can be cut about a month after the fruit has been picked. Remove a few leaves at the base of the bulb and let it dry in the sun for one or two days before planting it. The fruit can be harvested 12 months after planting. The crown can also be used to plant pineapple. Twist off the crown before planting it. The fruit can be harvested after about 18 months.

Pineapple is mainly found on French markets in winter. © capl@washjeff.edu, CC by nc-sa 3.0

Plants especially produce during the main fructification season, but there is also another lesser season six months later. Pineapple can be made to fructify at other times (off-season) by using chemicals to make the plant mature. Off-season pineapple is in high demand and can be sold at high prices.

It is much better to eat the fruit fresh rather than canned. Charts show that for equal quantities fresh pineapple contains a lot more vitamin C than canned pineapple. Vitamin C is easily destroyed by heat and the production of canned foods requires a lot of heat. Furthermore, raw pineapple contains a special substance (called bromelain) that can be used to tenderise hard meat. This substance is only found in fresh pineapple, not cooked pineapple. In fact, it disappears when pineapple is cooked or canned.

The percentage of daily requirements for an adult woman satisfied by a portion (about 100 g) of fresh pineapple and canned pineapple. © FAO

Pineapple is a member of the Bromeliaceae family, genus Ananas, which includes many epiphyte plants. However, pineapple (Ananas comosus) is not an epiphyte: it is a terrestrial species whose of which the short stems bear a rosette of smooth, sessile, closely interwoven leaves with prickles that are often sharp.

There are two main types of pineapple:

Don't use its colour as an indication of its ripeness: a pineapple's peel may be a little green but the fruit may already be ripe ("bottle pineapple", for example). If the pineapple's leaves no longer resist when you try to pull them off, then the fruit is ripe.

The pineapple should only be picked when ripe. If it is picked when it is still green it will not sweeten as opposed to other types of fruit. The sunnier it is during the growing season, the sweeter the pineapple.

Simply cut into slices, pineapples are delicious. They can also be used in fruit salads and desserts. Pineapple can be served alone or as accompaniments to other fruit, vegetables, meats or fish. Raw, it loses none of its vitamin C content.

To prepare a pineapple cut off the crown and the lower part. Remove the rough outer peel. Cut the pineapple lengthwise and, as necessary, remove the rachis. Collect the juice for young children. Do not throw out the peel or rachis but use it to prepare a delicious drink.

Meat can be tenderised in a pineapple marinade. To prepare this marinade mix table oil and lemon juice. Use two parts oil to one part lemon juice. Add fresh pineapple slices to the preparation and let the meat marinate for two hours before cooking.

Raw pineapple destroys gelatin. Therefore only cooked pineapple can be used in recipes that use gelatin as an ingredient. 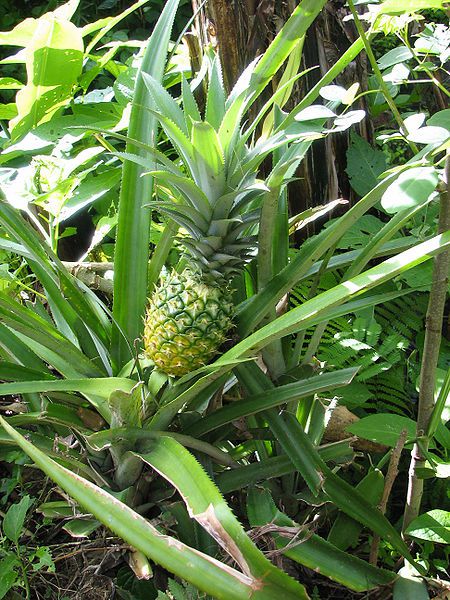