The mountain pine, which grows to between 20 and 25 metres high, strongly resembles the Scots pine but is distinguished by its greyish bark, dark green and thicker needles and its cones of which the warped plates curve downwards.

The mountain pine (Pinus uncinata) belongs to the Pinaceae family and is also called the Mungo pine.

The crown of this species is conical. Its branches, bearing dark and dense foliage, are regularly staged on a rectilinear trunk. Its bark becomes scaly quite quickly. Its needles, grouped in pairs, are quite short, thick and persistent. This is a monoecious species with male flowers grouped at the base of the year’s shoots, and female flowers forming small cones located at the tips of the branches. Its cones reach maturity after two years and have a scale that curls into a hook.

The mountain pine is a survivor of the last glaciations. It is originally from the French mountains (Alps, Jura and Pyrenees) at an altitude of between 1,600 and 2,200 metres.

This tree likes siliceous soil, especially the peat appreciated by the rhododendron. It prefers sunlight, but resists drought, cold temperatures and wind. It can prosper in peat bogs.

This species is used for timber and in reafforestation to maintain the soil and fight against erosion. 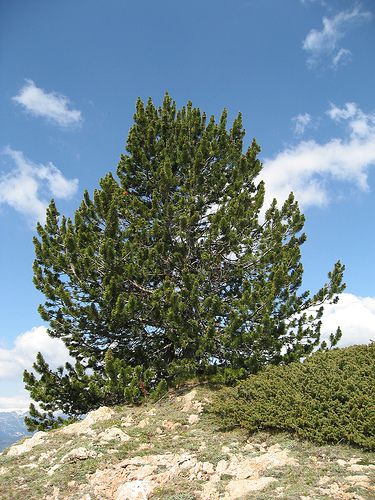