The mimosa is a small graceful shrub growing to between 8 and 12 m high.

The mimosa (Acacia dealbata) is a legume that belongs to the Mimosaceae family. It is also called the "silver wattle".

Botanical description of the mimosa

This shrub is quite slender and has many branches. Branches grow from its stock. Its light greyish-green bark turns brown with age. Its persistent leaves measure between 8 and 12 cm, are composed and bipinnate, with 14 to 24 primary divisions including 30 to 50 pairs of 2 mm leaflets which fold at night. This is a hermaphrodite species with small flowers with bright yellow stamens grouped into glomerules. These very fragrant flowers bloom from December to March. The fruit are flat, sea-green pods from 5 to 8 cm long grouped into strings that tend to turn brown at maturity.

The mimosa, a shrub in the Mimosaceae. family© Paul Appleton, nc sa 2.0

This species grows naturally in Australia and Tasmania. A botanist, Nicolas Baudin, brought back a few plants in the early 1800s as a gift for the Empress Josephine, who planted them in her Malmaison garden near Paris. During the French Second Empire this decorative shrub mostly grew along the French Riviera. Currently it is still mainly found there, as well as in Brittany.

Growing conditions of the mimosa

This species loves heat, at least 3 hours of sun per day, and well-drained soil, i.e. without stagnant water. It prefers sandy soil and does not grow well in very calcareous land.

The mimosa is essentially an ornamental shrub that gives magnificent bouquets at a time of the year when flowers are rare. 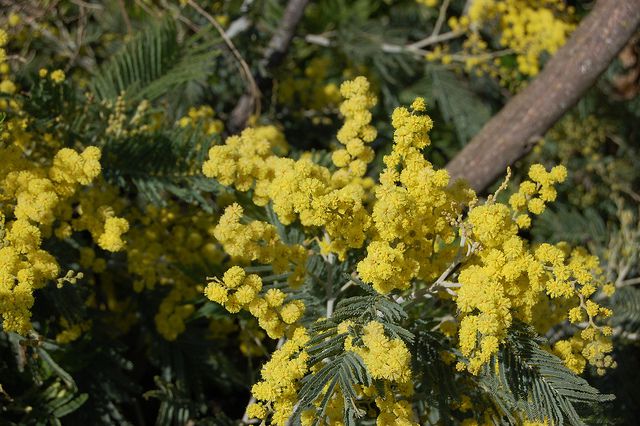