The maritime pine is a tree that grows quickly and can reach heights of 30 metres. It is very widespread and covers over 10% of wooded areas in France.

The maritime pine is a member of the Pinaceae family. © J-G in SF, Flickr CC by nc-nd 2.0

The maritime pine (Pinus pinaster) is also called the cluster pine. It is a member of the Pinaceae family.

Botanical description of the maritime pine

When adult this species often has a slightly flexuous trunk. Its crown is sparse and slightly conical in the upper part. Its bark, which is pale grey in young specimens, becomes reddish over time. It is thick and gradually cracks to form large scales. Its persistent needles are thick, rigid, measure 10 to 20 cm and are grouped into pairs. Their cross section is semi-circular. They eventually take on a tawny colour, then fall and slowly decompose to form a thick litter. Its golden yellow male catkins are grouped into compact masses at the base of the year’s branches. Female catkins are grouped by 2 or 3 at the top of the same branches.

Originally from Southeast Europe, this tree is commonly found on the southern Atlantic coast, especially in the Landes, Charente and Sologne regions and along the Mediterranean coast.

Growing conditions of the maritime pine

This is a calcifuge species, which does not require much fertiliser, but is in much need of light and heat. This pine is very sensitive to cold temperatures, which limits its progression northwards.

The maritime pine is grown in the Landes region for its ability to stabilise sand, as well as for its wood used in carpentry, the paper industry and joinery. In the past its resin was used to make turpentine. 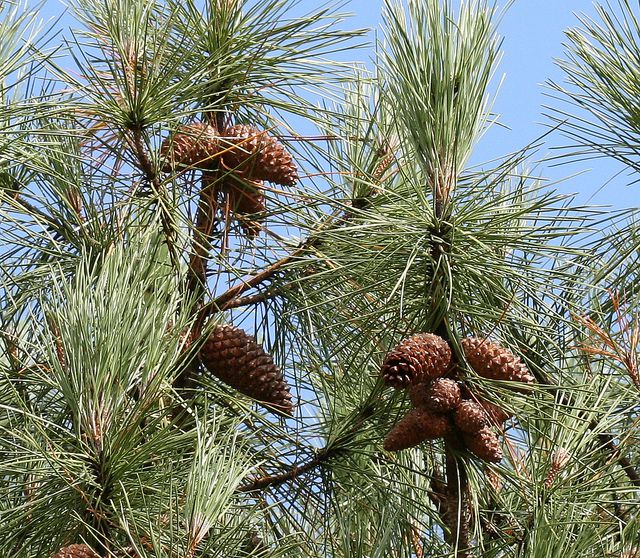