The London plane tree is a tree that can reach a height of 30 metres and is majestic and airy. Some plane trees live 1,000 years! This tree withstands pollution, and is thus used as an ornamental tree in urban areas and along the sides of roads.

The London plane tree (Platanus hybridus), from the Platanaceae family, is also called the "hybrid plane".

The trunk of this species is straight and covered in bark that cracks into scales, leaving yellowish areas. Its deciduous leaves are tough, large, measure 20 centimetres, they are alternate and include three to seven slightly dentated lobes. Its young shoots are covered in a brown-coloured hair, which remains for some time on the leaves. Its flowers are male and female catkins. Its spherical, hair covered fruit, grow on the ends of the branches either singly or in clusters of two to five. They ripen in autumn and are released into the wind during the following spring.

This tree is a hybrid produced from crossing a western plane tree (Platanus occidentalis), originally from the United States, with a plane tree from Asia minor and the Balkans (Platanus orientalis). It was introduced into France around 1660.

The London plane tree grows quickly, especially if it is planted in deep and cool soil. It tolerates severe pruning. It is sensitive to very cold weather, and frost cracks may appear on its trunk. A microscopic fungus called (Ceratosystis fimbriata), or black rot, is a disease causing it to rot.

This species is valued as an ornamental tree along the sides of roads and in urban areas. The wood of the plane tree is light coloured, hard and firm, and is suitable for use in joinery. Its wood also burns cleanly. 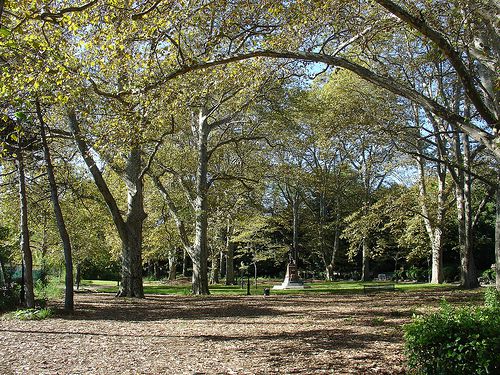