The incense cedar is a giant tree> which can grow up to 60 m high! In its adopted region, the United States, it has a superb columnar structure. Its foliage, as well as its wood, is very fragrant, reminiscent of turpentine.

The incense cedar (Calocedrus decurrens) is a member of the Cupressaceae family and is also called the "California incense cedar".

Botanical description of the incense cedar

The structure of this tree is columnar and its limbs end in fan-shaped arrangements of flat branches. Its reddish-brown bark cracks into vertical plates. Its persistent foliage is squamiform, meaning it has scales that sometimes clearly extend along the branch. They are called decurrent, which is where the species' scientific name comes from. This is a monoecious species, its unisex flowers grow in small terminal catkins. Its fruit, which are 2 to 3 cm long cones, consist of 4 pairs of unequal scales. Only one pair of scales is fertile and protects 2 winged seeds.

The incense cedar is a tree that grows in America along the Pacific coast, near the giant sequoia.

Growing conditions of the incense cedar

This species is very hardy, but requires non-calcareous soil. It resists cold temperatures down to -23 °C.

The light and fragrant wood of this tree is used in the United States to make pencils. It is also used to produce battens, panelling, shingles and fences. The incense cedar is also an ornamental tree and can, for example, be seen in Paris near the Champs Elysees. 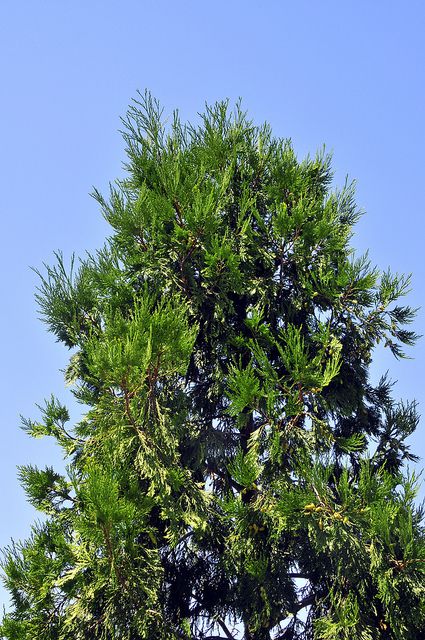