Hackberry is a treethat can reach heights of up to 20 metres and essentially grows in Southern France, where it is found in woods and scrubland, in the low mountains up to an altitude of 900 metres. It can live up to 500 years.

The hackberry (Celtis australis), from the Ulmaceae family, is also called the "European nettle tree".

This species has a straight trunk and many branches that hang downwards. Its ribbed bark is similar to oak bark, grey with a few pustules and bumps.

Its deciduous leaves are simple, alternate, elliptical, slightly asymmetrical at the base, dentate and rough on the top, similar to elm leaves but, more elongated and not as wide.

Its small flowers, which have no petals, bloom in May, are generally solitary and are located at the pits of leaves, with a barely visible corolla, but very well developed white stigma. In September, its small brown fruit look like olives and remain on the tree after the leaves fall.

This tree comes from Southern Europe, Eastern and Southern Asia as well as the Americas.

This species loves full sunlight and prefers deep soil, but can also tolerate dry, poor and porous soil. It adapts particularly well to the summer heat in urban areas, where it is used like the plane tree, to shade the streets and avenues of the South of France.

Flexible hackberry wood is strong, and therefore used to make walking sticks, tool handles and oars. In the past, its bark and roots were used to produce a yellow dye, and its foliage was used as feed. 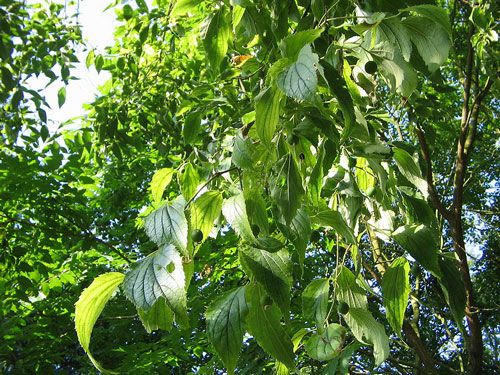