The grey poplar is a natural hybrid of the aspen and the white poplar. It has characteristics of both species and produces fertile seeds, which is rare in hybrid species. Adult trees can reach heights of 20 to 30 metres.

The grey poplar (Populus canescens) belongs to the Salicaceae family. It gets its name from the greyish, downy coating of the underside of its young leaves.

This species has a massive silhouette, with a wide and rounded crown, which is not the case for its cousin, the classic white poplar. Its bark is whitish with black lines, and gradually cracks over time. Its leaves, deciduous and pubescent, may differ in appearance on the same tree, whether oval or rounded, crenate or a little lobed. Its young branches are also pubescent. This is a dioecious species with male and female catkins, which measure from 3 to 4 centimetres and appear in March-April. Its buds are ovoid.

This rather uncommon tree is found in a variety of locations, spontaneously or planted, throughout Europe, from the Atlantic coast to Western Russia. In France, it is mostly found in the Northeast, along watercourses and in humid, shady forests.

The grey poplar adapts to all types of soil and withstands cold weather. It prefers to grow in full light, in a humid environment.

The grey poplar grows quickly and its elegant crown makes it a tree used for ornamental purposes in some cities. Its light weight, white wood is especially used to produce crates used on markets. 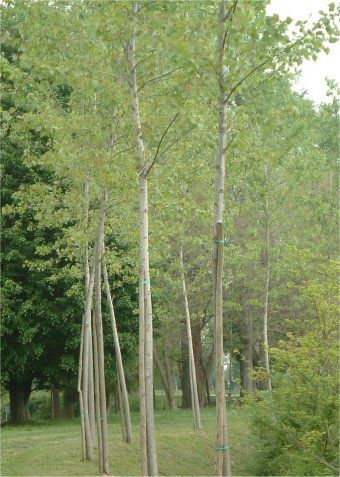