The giant sequoia is the most voluminoustree in the world. One specimen beat the world record with a volume of 1,486 m3, a circumference of 31.3 metres, a height of 83.8 metres and a weight estimated at over 2,000 tonnes! The trunk of this giant, located in a park in California and called "General Sherman", was hollowed out to form a tunnel that cars can pass through! But in general, this species does not usually exceed 50 to 60 metres. This tree can live over 2,000 years!

The giant sequoia (Sequoiadendron giganteum) is a conifer classified in the Taxodiaceae family.

The crown of this species is conical and has a pointed top. Its branches initially grow at an incline and straighten with age. Its bark is thick, reddish, fibrous, does not have resin but is rich in tannins. Its needles, pointed and awl-shaped, are evergreen, arranged in a spiral around the stem, of a greyish green colour and give off an odour of aniseed when bruised. Male flowers of this monoecious species, which appear in March-April at the end of the branches, are tiny and yellowish.

Its female flowers, ovoid, are arranged at the end of a small, scaly and shiny stem. Its female cones mature after 18 months and can remain closed on the tree for several years. They only open at the end of a very hot summer. These cones, brownish at maturity, have a depressed patch in their centre.

In the wild, giant sequoias are only found on the western side of the Sierra Nevada in California. In this region, there are nearly 16,000 specimens of a circumference larger than 1 metre. Fossil discoveries have allowed scientists to ascertain that giant sequoias were widespread in Europe and North America during the Jurassic and Cretaceousperiods, about 200 million years ago. In the 19th century, seeds from this species appeared in Europe.

The wood of this species is very decorative, soft and not very strong, and does not have any useful value. 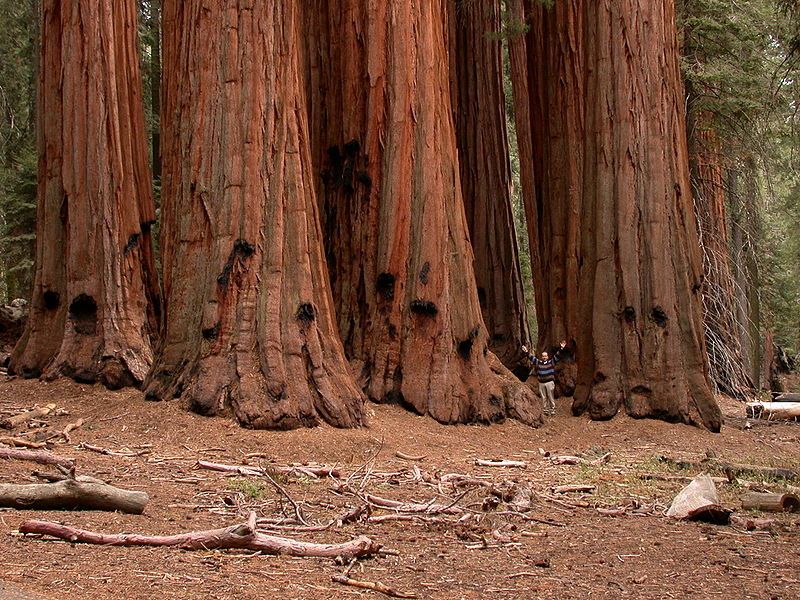 Sequoias are the giants of the temperate forest, shown here in the National Sequoia Park in California. © Paul Rudenko, public domain