The European hop hornbeam is a beautiful small tree that can grow to heights of 15 to 20 m, particularly appreciated in the Mediterranean countries and, in France, on the Riviera and in Corsica.

The European hop hornbeam (Ostrya carpinifolia) is also called the "Old World hop hornbeam". It is a member of the Betulaceae family.

This species has a rather diffuse crown which rounds with age. Its ash grey bark peels off in plates. Its leaves are deciduous, alternate, slightly pubescent, especially on their lower face, and dentate. These leaves have 12 to 15 pairs of very distinct veins. Its male flowers are hanging catkins, while its female flowers are erect, terminal catkins, forming hanging fruit (which look like hops) when ripe.

This tree is originally from Mediterranean countries, where it prospers near the Aleppo pine, the maritime pine and the pubescent oak.

This tree can grow in arid soil, in sunlight or partial shade. It thrives in light, humus rich and even calcareous and dry or moderately humid soil. This is a very hardy species, which can withstand temperatures at least down to -20 °C.

The European hop hornbeam is a very beautiful tree planted individually in parks and gardens or used to create decorative alignments. Its wood is quite strong and hard. 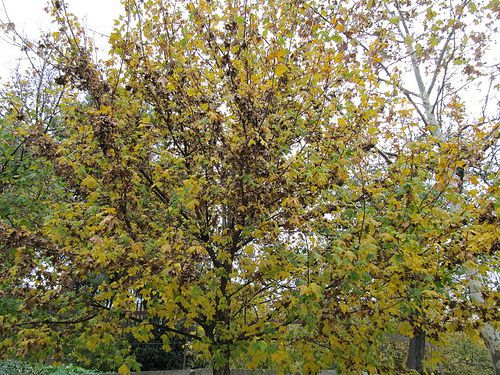