The European black pine is a large tree that can reach heights of 20 to 50 m.

The European black pine (Pinus nigra) is a conifer in the Pinaceae family. It is also called the Austrian pine.

The crown of the European black pine is pyramidal, dense and dark green. Its bark cracks deeply as the tree ages. Its leaves, persistent, are needles grouped into sections of 2 to 5 which, when united, form a cylinder with a half-circle section. The base of the needles bears a fibrous sheath that falls off the following autumn. Its dark purple female catkins are located at the end of the year's shoots, while the yellowish male catkins are grouped at the base of the year's shoots. Its fruit are falling cones that release winged seeds when they open in autumn. The cones take two years to reach maturity.

This species, originally from Austria, was introduced into France in 1834 and quickly became common as an excellent species for reforestation. It grows throughout Europe, from Spain to the Crimean.

This tree adapts to all types of soil but prefers dry and sandy soil.

The wood of the black pine, similar to the wood of the Sylvester pine, is moderately hard and has a straight grain. It is used, especially in Europe, as a fuel as well as in paper production and construction. 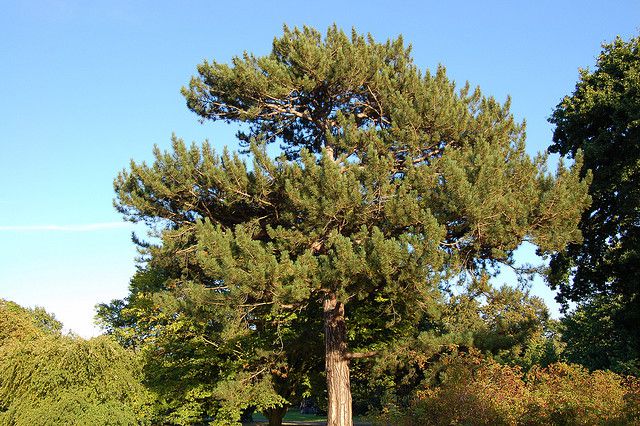