The common broom is a small bushy tree that grows to a height of 1 to 3 metres. Its name is derived from the fact that its flexible and strong branches were used to make brooms.

This species is found throughout France, except in the Mediterranean region and in Corsica, often in poor and uncultivated land.

This plant (Cytisus scoparius) is a Papilionaceae in the Leguminosae family, like the bean and lucerne. Chateaubriand referred to its flowers as "golden butterflies" in one of his novels!

The trunk of this species has grooved bark. Its angular branches contain chlorophyll, which gives them a curiously green colour, and have small simple flowers on their ends and, lower down, deciduous leaves with 3 folioles. In spring, the common broom produces beautiful 2.5 centimetre Papilionaceae flowers of a very bright yellow colour. Its flowers are solitary, but numerous all along the stems. Each pleasantly fragrant flower has 9 fused stamens at their base, while their long stylus winds into the shape of a hunting-horn. These flowers are pollinated by the bumble bee. In late summer its pods, which are about 3 centimetres long, turn brown and burst with a snapping sound, spreading seeds on the ground.

This shrub is originally from northeast Europe, but was widely introduced into other continents. It is now considered an invasive plant in many countries (United States, Australia and New Zealand).

Young specimens can be planted in the garden in autumn, preferably in poor, sandy and well-drained soil.

The common broom is a Leguminosae and therefore is able to fix nitrogen from the soil through the tiny nodes that grow on its roots. This advantage can be put to use to enrich certain types of soil. 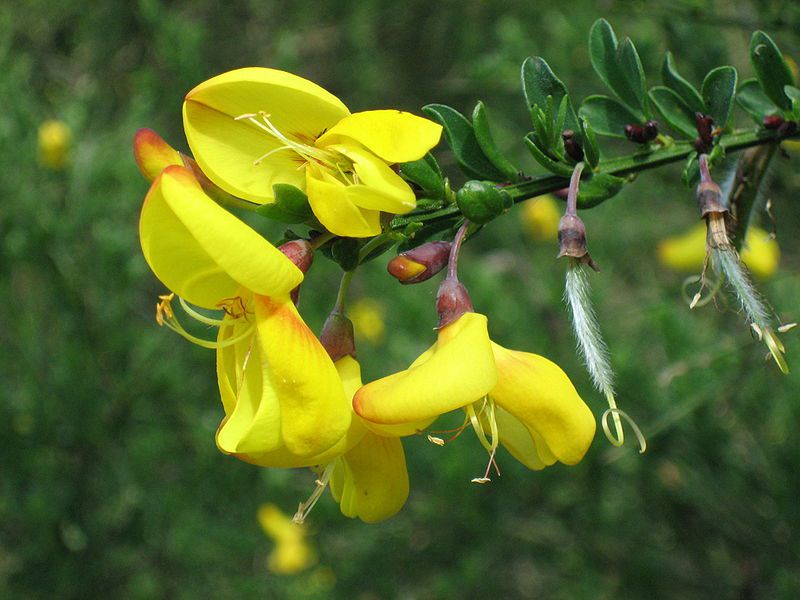