Even if its name makes you think of the sun, coconut is a true exotic fruit that is sold in the refrigerated section of stores in the autumn and winter seasons in France. Raw or cooked, coconut complements many types of dishes, from chicken to salads to desserts.

Rich in fat and sugar, coconut contains 353 kilocalories per 100 grammes. However, the nutrients it contains, such as fibre, vitamins, minerals and proteins, are good for keeping in good health. Manganese, magnesium and potassium, are all beneficial to coconut lovers. To meet nutritional needs, drinking coconut milk is recommended because of its iron and phosphorous content.

In western countries only one variety of coconut is sold; the one with a brown shell and white flesh.

When shopping for coconuts, make sure the coconut is heavy, full and without cracks. Its eyes should not be mouldy. It can be kept for up to two months in the refrigerator and up to two weeks at room temperature. However, once opened, the coconut can quickly dry out; it will not keep for more than 24 hours. The only solution to make the pleasure last longer: grate its flesh and keep it in a sealed container. Cracking the coconut to eat its flesh may be its only drawback, because its shell is often tough. It is best to pierce the " eyes" with a sharp instrument, empty the liquid (or keep it) and put it in an oven heated to 190°C for 15 to 20 minutes. Then you should hit it with a hammer, so that it splits completely. The brown skin should be removed with an peeler.

Coconut can be used in all the courses of a meal. Ideal for Indian, Indonesian, African or South American dishes, sprinkle its preferably grated flesh over a seafood salad. For desserts, a touch of coconut is often used on chocolate cakes and in many other pastries. It is also the main ingredient in certain types of biscuits, such as Congolese. Japanese restaurants also often use its exotic and fragrant taste.

Originally from Malaysia, the coconut weighs between 1 and 1.5 kilogrammes. Its ability to float made it possible for it to settle and then put down roots in sandy soils of the planet’s coastal regions. It is thus mainly produced in Ivory Coast, the Dominican Republic, Sri Lanka, Kenya and in the Philippines. This exotic fruit is considered to be a gift from the gods by some civilisations, because of its three eyes. One variety, called the sea-coconut, can weigh up to 22 kilos. 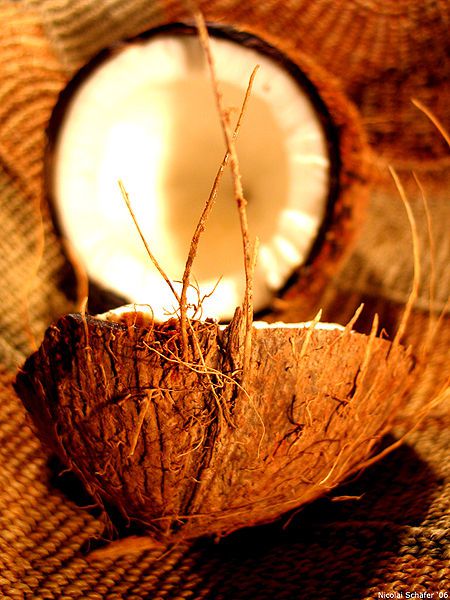