The black walnut (Juglans nigra), belongs to the Juglandaceae family and is also known as the "Eastern black walnut".

Botanical description of the black walnut

This tree has an ample, ovoid and irregular crown. Its slender, straight trunk and its ascending branches tend to spread out with age. Its dark brown bark is cracked with deep grooves. Its foliage, which gives it a dense shadow, is shiny and pale green. Its deciduous leaves are very large, comprised of 14 to 22 oval leaflets, pointed at the end and rounded at the base. Its flowers appear in April-May in the form of yellowish catkins. Its fruit are round and contain edible nuts which, however, are bitter.

This species comes from the Eastern United States where it grows abundantly. It was introduced into England in 1686 and since then has grown widely throughout Europe.

Growing conditions of the black walnut

The black walnut is sensitive to springtime frosts, which makes it partial to locations sheltered from the Northern and Eastern winds. This species tolerates calcareous and rocky soil, as long as it is permeable, but still prefers rich and cool soil.

The wood of the black walnut is heavy and consistent, withstands humidity and is valued by cabinet-makers for its lustrous beauty and very dark colour. 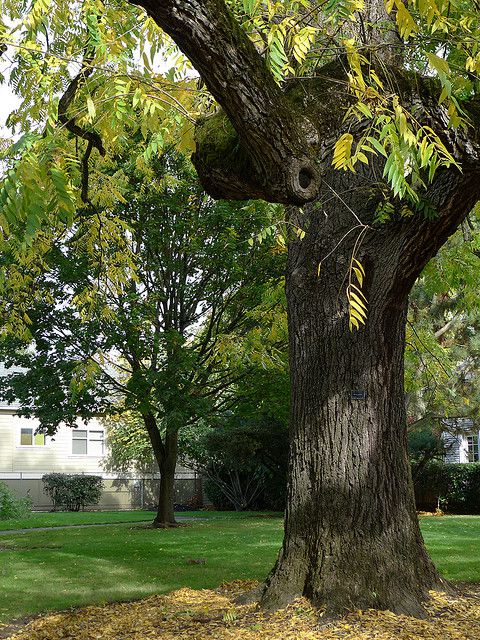 Black walnut. © Trees of my Neighborhood, Flickr CC by nc 2.0