The black poplar (Populus nigra), is a member of the Salicaceae family.

Botanical description of the black poplar

The crown of this species has almost horizontal branches, with the ends divided into delicate twigs, the whole being quite rounded. Its bark is greenish brown and cracks with age. Its deciduous leaves, are green and turn yellow in autumn, are dentate, oval and triangular, and end in a point.The axil has a long pointed petiole with chestnut coloured buds. Its flowers are reddish or silvery white hanging catkins and appear in March - April.

This tree, originally from Asia Minor, appeared in France in 1745, coming from Italy.

Growing conditions of the black poplar

Like most poplars, this tree likes deep soil with plenty of water. Very demanding in terms of light, it is not found in dense settlements, but rather in small clumps.

Resistant to pollution, the black poplar is planted along roads. Its buds are used for medicinal purposes to treat rheumatism and gout. They are used to make a wine that is an excellent cough remedy. 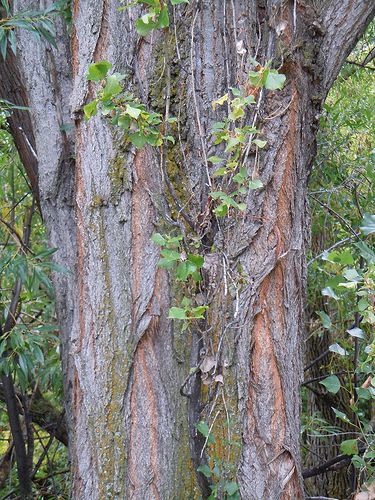