A basal shoot is one that grows from a plant's root and can become autonomous and be replanted as a new individual. This offshoot is genetically identical to the parent plant. When these shoots grow from the stump, they are called suckers.

Some species, such as the apple, the wild cherry and the hazel, are particularly prone to suckering. This is therefore an asexual reproduction method creating an identical plant from the original plant. The term natural clone is also used, as in the case of layering. Basal shoots should not be confused with the epicormic shoots that grow from the trunk or branches of atree. 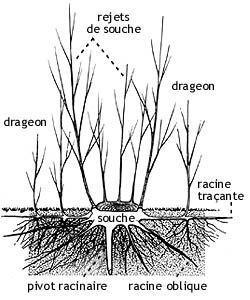 After felling, the stump of a tree will produce suckers, whereas basal shoots will grow from the horizontal roots, called creepers. © Pierre Le Den, ENSP, (MR & SD)