The bald cypress is a conifer that can reach heights of between 30 and 40 metres. In order to survive in the difficult environments where it first grew, particularly in the marshy regions of Florida, it developed curious aerial roots, called pneumatophores, around its trunk. These projections are raised, just like stalagmites, in order to operate a special respiratory system. This species also has another particularity not commonly found in conifers: it loses its leaves in winter, which is why it is called "bald".

Despite its name, the bald cypress (Taxodium distichum) is not a member of the cypress family, but belongs to the Taxodiaceae family, along with the sequoia. It is also called the "southern cypress" or "swamp cypress".

The bark of this tree is fibrous and vertically fissured. Its needles are short, measuring less than 1 centimetre, soft and a light green colour. Its flowers are tiny and appear at the end of the branch in autumn to produce a fruit, a scaly ball, the following spring. This conifer reproduces in a strange manner, through its roots located around the tree young plants appear in a clearly visible circle.

The bald cypress, from the Southeast of the United States, was introduced into Europe in 1640 by John Tradescent, gardener of the King of England, Charles the 1st.

This species is fond of the edges of marshes, and grows in full sunlight or partial shade. It tolerates land that is peaty, flooded and difficult to reach.

The wood of this cypress is of a comparable quality to the wood of the Scots pine, but it is mainly planted for decorative purposes. 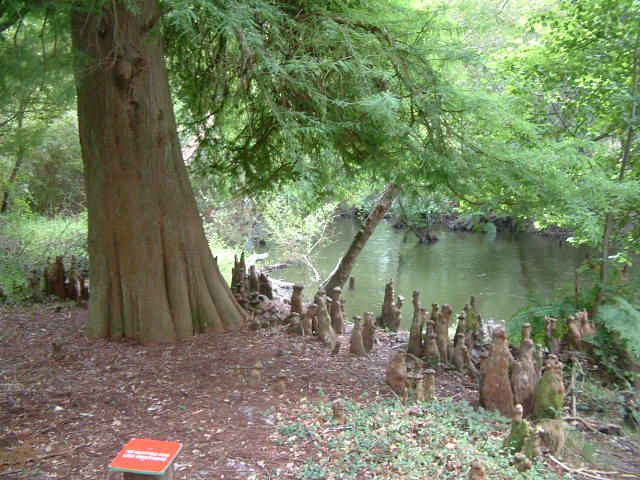