The almond tree is a fruit tree that can reach heights of 5 to 10 m and is very well known for the deliciousness of its fruit.

Thealmond tree (Prunus dulcis) is a member of the Rosaceae family, like the apricot tree, the cherry tree, the wild cherry tree the peach tree and the plum tree.

Botanical description of the almond tree

This tree has a ovoid structure that spreads out over time. Its trunk is gnarled, as are its branches. Its bark becomes grey and scaly as it ages. Its leaves are deciduous, alternate, longer than they are wide, lanceolate and denticulate. This is one of the first trees to announce the coming of spring, with the appearance of beautiful pinkish white blossom in February-March, before its foliage develops. Its flowers, which have five petals and enclose many stamens, are often grouped into pairs. Its fruit, almonds, are elongated and flat, measuring 3 to 4 cm in diameter and have a downy envelope which is green then beige and opens when ripe.

The almond tree is originally from Western Asia. © Bambo, Flickr CC by nc-sa 2.0

Growing conditions of the almond tree

The almond tree is very sensitive to cold temperatures and needs light. It enjoys sunny exposures and resists drought very well. It even adapts to poor soil and can grow on dry and stony soil. It enjoys calcareous land.

The fruit of the almond tree are non-toxic seeds, as they do not contain cyanhydric acid, as many species of Rosaceae do. They are used in making pastries and confectionery. 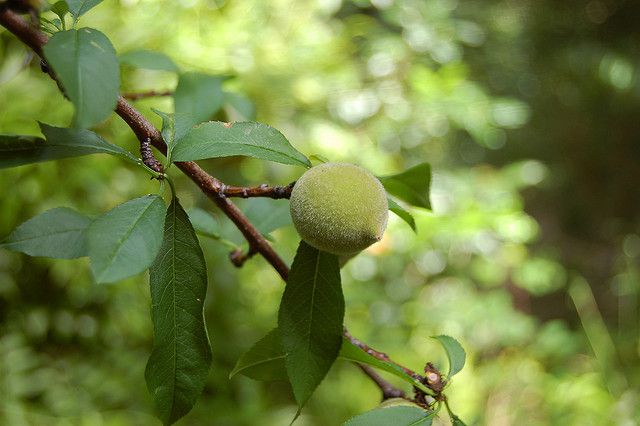