The ailanthus is an ornamental tree with light and elegant foliage. Its abundant, small fruit gives it a decorative aspect.

This species is often planted along roads and in cities, due to its exemplary resistance to pollution. For some time, wild specimens have developed spontaneously on uncultivated land, without being planted, growing at a surprisingly quick pace. The ailanthus is an exceptionally vigorous species!

The ailanthus (Ailanthus altissima), also called the "tree of heaven", is a member of the Simaroubaceae family.

The ailanthus is a large, slender tree, that can reach heights of 20 metres. Its trunk is straight and has large branches with few ramifications. Its bark is grey and smooth, with a few crevices that can form with age. Its deciduous leaves measure 40 to 50 centimetres and consist of about twenty lanceolate folioles, with 2 to 4 teeth located near their base that release an odour similar to peanuts. This is a characteristic that can help you identify the species. Its small greenish flowers bloom in clusters in late spring and release a very strong scent.

In September, its abundant fruit, which have brownish samara and are in the shape of helices, hang in abundant clusters.

This species comes from certain regions of China and was introduced to Europe at the end of the 18th century. It is mentioned in the oldest known Chinese dictionary and named in numerous Chinese medical texts for its presumed ability to treat illnesses, from mental illness to baldness.

This species does well on all types of land and in all climates. However, it prefers humid and clay soil. It can withstand drought.

In China, the ailanthus used to be grown to feed silkworms. Today, it is mainly grown for its decorative qualities. Its wood is easy to work, but breaks easily and is not very durable. Its logs burn well, but emit a large number of sparks, so a fire guard must be placed in front of the hearth. 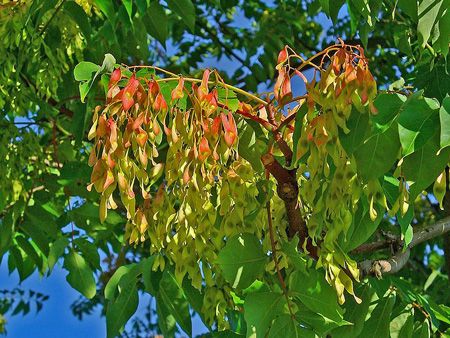