The thymus is an immune system organ located at the base of the neck behind the sternum.

Function of the thymus

The thymus is a primary lymphoid organ, that is, it takes part in the maturation of immune cells, the T lymphocytes.

Prothymocytes mature into T lymphocytes during migration of cells from the cortex to the medulla in response to two hormones produced by the thymus, thymopoietin and thymulin. The lymphocytes then acquire TCR receptors and CD4 and CD8 co-receptors which are involved in antigen recognition. They are the target for positive selection (to confirm that the receptors are appropriate) and negative selection (to confirm that they do not recognise self antigens).

Structure of the thymus

The thymus is composed of two large lobes which atrophy from adolescence The lymphoid tissue gradually gives way to adipose tissue.

The thymus is formed from several lobes which are separated by septa. The peripheral parts are called the cortex (dark) and the internal part is called the medulla (clear). 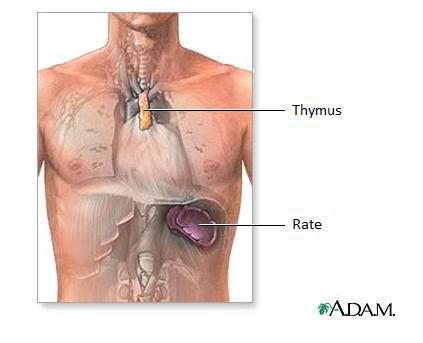 The thymus is the place where T lymphocytes mature. © Adam