The testes are part of the male reproductive system.

Function of the testes

The testes are glands which produce testosterone, the main male hormone responsible for the development of genital organs. It begins to be produced at puberty and triggers changes to transform the boy into a man, by triggering the development of male secondary sexual characteristics.

Spermatogenesis (the production of spermatozoa) also takes place in the testes This begins at puberty and continues throughout the man's life. Whereas girls are therefore born with their entire reserve of eggs, men only begin to produce spermatozoa at puberty. Unlike women, however, men renew their reproductive cell or gamete reserve throughout their lives.

Beginning at puberty, the testes permanently produce new spermatozoa that are carried to the testes through the vas deferens, leave the canal inside the penis, where they mix with a liquid produced by the prostate and seminal vesicles. This fluid and spermatozoa is called "semen". Semen is released by the penis when a man ejaculates. It is expressed by the urethra, which is the channel that carries urine from the bladder outside the body. Each drop of semen contains tens of millions of microscopic spermatozoa. A single spermatozoon reaches the uterus and fertilises the ovum.

Structure of the testes

Although they vary in size between people, the testes measure an average of 3 x 2 x 5 centimetres, and weigh approximately 18 grams.

The testes are divided into several testicular lobules that contain the seminiferous tubules where spermatogenesis occurs. The spermatozoa ultimately arrive in the epididymal duct where they finish maturing, and they then enter the vas deferens, which is connected to the prostate. 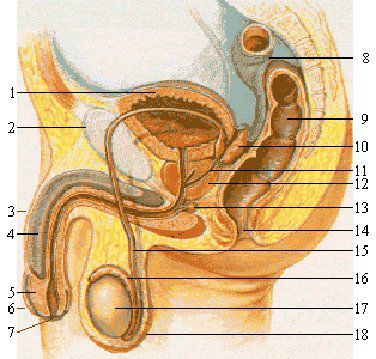