The stomach is part of the digestive system.

Function of the stomach

The function of the stomach is to digest food chewed in the mouth and carried to the stomach through the oesophagus. Digestion in the stomach lasts for 3 to 7 hours and occurs through digestive enzymes (proteases such as pepsin) and the hydrochloric acid in gastric juices. The reduced pH facilitates the action of the enzymes (pH of between 1.5 at night and up to 5 before digestion).

The food is turned over by the muscle movements of the stomach wall. The food gradually forms a paste known as chyme which pours into the duodenum, the next organ in the digestive tract.

Structure of the stomach

The stomach is J shaped and is located between the oesophagus and the duodenum. It forms a bag 25 centimetres long with an empty content of 0.5 litres, but can contain up to 4 litres. The stomach can be divided into three regions, the fundus, the body, and the antrum.

It has a type of functional sphincter (the fold of the cardia) in its upper part which prevents acid reflux into the oesophagus and a lower, pyloric, sphincter.

Its wall is composed of three layers of powerful muscles, the circular, the oblique and the longitudinal. The inside of the stomach is lined with a thick mucus, 1.5 millimetres thick, which protects it against autodigestion. The internal mucosa is folded and contains secretory glands, the gastric wells. These are what secrete pepsinogen which is converted into pepsin by the action of hydrochloric acid, which is also secreted. 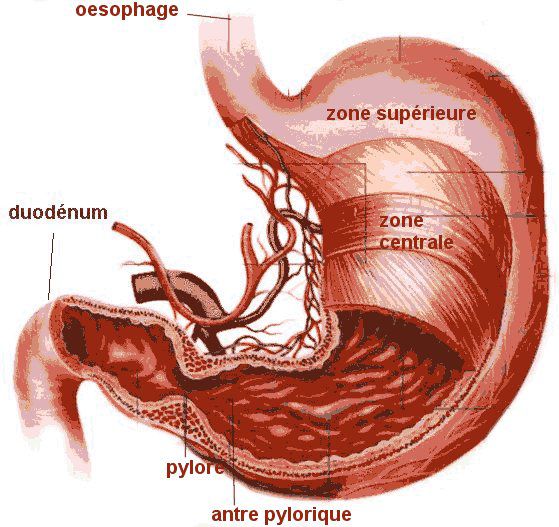 The stomach is part of the digestive system. Its acid pH enables it to digest foods over 3 to 7 hours. © imageshack.us